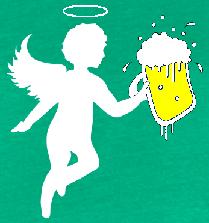 Dave White of Wigan CAMRA has just visited the Lower Angel in Warrington and he has been assured that the Tipsy Angel microbrewery that they are setting up will serve its first pints next Friday the 29th April.  I have written about this previously (you can find my posts here), and I have a special interest as I was a student at Padgate College just outside Warrington, and the Lower Angel was one of the alehouses we used to frequent.  More recently, the pub was run by Charlie Oliver, who used to run the Old Ship in Southport when it was a real ale Mecca.
I do like the name of the micro, Tipsy Angel, which is a resolute two fingers to the humourless anti-alcohol brigade who will probably condemn such a name as encouraging irresponsible drinking.

P.S. (3 May):  Tony of Warrington tells me:  "The Tipsy Angel brewery is now up and running, Aidan's first brew was Angel's Folly, a dark stout based on the old Walker's Falstaff ale.  They shifted 4 x 9's on Friday 29th April, I luckily managed to get in for a couple before it went. A bitter is due next, I gather."
Posted by Neville Grundy at 8:13 pm

Email ThisBlogThis!Share to TwitterShare to FacebookShare to Pinterest
Labels: microbrewery