Final furrow for the Plough 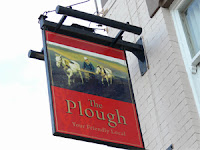 The Plough Hotel in Rufford Road, Crossens, is the northernmost pub in the county of Merseyside. It is a highly visible landmark as you cross the Southport-Lancashire boundary, and is mentioned on bus timetables. It is one of the older pubs in Southport. It closed in January and was advertised to let by its owners Enterprise Inns, and in March was put on sale. Now an application has been made for planning permission to demolish it and build 14 houses. I have little doubt that permission will be granted.

In theory, this pub should have been successful. Its nearest rivals are certainly far beyond easy walking distance and there is quite large number of houses in its vicinity. I suspect that it has fallen victim to the policy of managed decline that pubcos adopt when they want to dispose of property: little investment resulting in the building becoming less attractive, and when the numbers of customers decline below a certain point, declaring it is no longer viable. I do know there are circumstances when a pub can, despite best efforts, become unviable, but I doubt that the phrase "best efforts" describes the situation that has arisen here.

Although I have never known it to be a real ale pub, while a pub remains open, the possibility always exists. Demolished, and obviously it doesn't. And so another one bites the dust.
Posted by Neville Grundy at 10:46 am