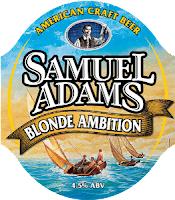 A nice surprise when I went into the Guest House in Southport last night was the sight of Samuel Adams Blonde Ambition on the bar. This is a real ale, 4.5% strength, produced by Shepherd Neame in collaboration with the American craft brewer, the Boston Beer Company. The website states that beer uses equal measures of American and British Cascade hops, with Yakima Valley Cascade, also from America. As you'd expect, it was fairly dry, golden-coloured ale which I found slipped down very easily, some might say too easily considering its strength. Judging by the way the hand pump was being hammered, quite a few other drinkers felt the same way. It has more character than some golden beers produced by regionals, such as the popular Thwaites Wainwright, a beer I like well enough but don't find exceptional; or Robinson's Dizzy Blonde, which borders on the bland.

I found it interesting that the term "craft beer" was unequivocally featured on a real ale pump clip: two fingers to those who wish to differentiate between real ale and craft beer. This beer also demonstrates that the stuffy old regionals can match the micros when they choose to. In July I briefly alluded to a similar co-operative venture between Adnams and the Firestone Walker Brewing Company of California. While the regionals' main money is still in producing the standard beers we associate with them - and it's easy to forget in our real ale bubble how popular those beers are - it's good that they're willing to give something different a try, and doing it so well too.
Posted by Neville Grundy at 2:41 pm