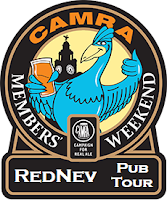 Are any readers of ReARM coming to Liverpool for the CAMRA AGM? If so, would you care to join me for an informal tour of some of my favourite Liverpool pubs?

I was thinking of holding it on Saturday night, meeting in the members' bar and taking it from there. I haven't thought it all through yet, but I was thinking of 5 or 6 pubs, including:
If anyone's interested, let me know in the comments below. If there are any takers, I'll publish a post next week with more details.

P.S. 27 March: No takers, so obviously not a good idea.
As the song says, let's call the whole thing off! See some of you perhaps over the weekend.
Posted by Neville Grundy at 1:47 pm