The fest that never was 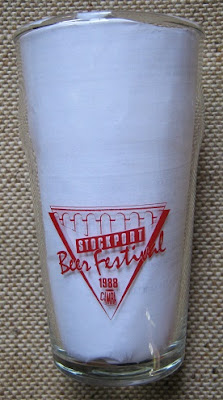 This beer glass is one of the more interesting ones in what I laughingly call my collection. I picked it up a long time ago at another festival, possibly Bury. There's nothing special about the glass itself: it's just a standard nonic with an attractive logo for the Stockport Beer Festival of 1988, exactly thirty years ago.

Except it's not: this festival never took place. Among the organisers, there was apparently a conversation along the lines of:
"Did you apply for the licence?"
"No, I thought you were doing that."
Oh dear!

By the time they realised they had no licence for the event, it was too late. Unfortunately it was also too late to cancel the order for the glasses, and I picked up one for the novelty of having a glass for the beer festival that never was.

I went to the Stockport beer festival a couple of times a good few years ago; it was held in Stockport Town Hall in those days. On the last occasion, we caught the train from Southport and rolled up for the Saturday afternoon session. Unfortunately, they had almost run out of beer so we strolled along to a pub underneath the viaduct which you can see in stylised form on the glass. The pub was the Crown where, as I recall, we had a really good afternoon before going home happy. Checking on What Pub, the Crown still looks like a great pub.

In case you're wondering, although you probably weren't, it's not made of white glass;
I put paper inside to show the design more clearly.
Posted by Neville Grundy at 2:53 pm