I was chatting to Dave in the Lion Tavern in Liverpool on Tuesday; I was there for our monthly singaround. He was telling me the the current licensee of the Dispensary on Renshaw Street, also called Dave, is retiring.

I wrote about this pub almost exactly 6 years ago on 19 September 2013: "This pub has won Liverpool CAMRA's Pub of the Year award in the past, and I have spent happy afternoons and evenings there. The licensee once took the mickey out of me when he saw me at the bar writing down all the beers that were on. He obviously didn't believe me when I told him I was making notes for my beer blog."

He actually declared in a loud voice that "We've got another ticker in!" One thing I am not is a ticker, but I took it as banter, even though Dave's reputation was such that I doubt he'd have been bothered if I had been offended. His approach to customer service has been described as eccentric, but I always found that the beer was on good form.

Dave in the Lion told me that the Dispensary will now be focusing on craft ales and cocktails and that no real ale has been included in the next order. This is a shame, and I see no reason why a pub cannot sell both craft beer and real ale, as the Tap & Bottles in Southport does. 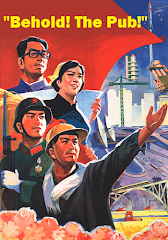