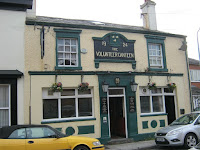 Waterloo is fortunate in that it has four Good Beer Guide pubs within a quarter of an hour walk, all reasonably close to Waterloo Station on the Liverpool to Southport line. Of these, only the Volunteer Canteen on East Street is a traditional pub, the others being converted from shops and a bank. The Volly is a mid-terrace, Victorian pub with an interesting exterior in a backstreet less than 10 minutes from the station and bus stops. Originally called Waddington's Canteen Vaults after an early landlord, it gained its present name in 1906 as a tribute to the fact that some of its then regulars had survived fighting in the Boer War.

It used to be owned by Higsons of Liverpool, as you can still see in the engraved windows (you can just make the name out if you click on the top photo). It is a two-roomed pub in which I could see few signs of modernisation. The attractive lounge still has table service, while the vaults seem to be more popular with regulars. They are in the process of setting up a community book swap/library in the lounge, making use of the old wooden bookcases. The bar serves both rooms, and I was told that the bar fittings on the lounge side are listed. There is a quiz night on Tuesdays, and a TV for sports, but other than those, it relies on just being a good local: a sign outside declares: "No pool - no jukebox - no fruit machines. Plenty of good traditional beer. Bar food". I found the people there to be very friendly, and I ended up chatting to several people who were obviously regulars.

The real ales that were on were:
Liverpool Organic Pilsner;
Liverpool Organic Special 857;
Peerless Storr; and
Courage Best Bitter.
The beers I had were all very drinkable, and I ended staying rather longer than I had planned.

The Volly was awarded Community Pub of the Year in 2014 and I can understand why. I wrote about it previously six years ago, and I'm pleased that it remains a fine pub that is definitely worth a visit if you happen to be in the North Merseyside area.

If you suffer from technology dependency, there's free WiFi too.

This is part of a series of articles that I am writing for the CAMRA column in our local paper, the Southport Visiter. Previous reviews are here.
Posted by Neville Grundy at 1:27 pm