Sex equality just a swift half away 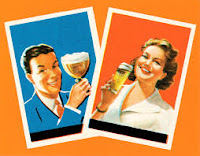 A worldwide study of drinking habits has shown that women have almost caught up with men in terms of drinking. A team at the University of New South Wales in Australia analysed data from people all over the world and they discovered that:

As this is a global study, the answers as to why this is happening don't lie in the British context alone, but it isn't unreasonable to suggest that factors may include the increasing availability of alcohol, and the fact that alcohol advertising is often targeted specifically at women, especially young women.

Predictably, Alcohol Concern states that this trend shows the need for mandatory health warnings on alcohol products and a mass media campaign to raise awareness, while the Portman Group points out that "Official data shows significant declines in women's alcohol consumption, frequency of drinking and binge-drinking rates over the last decade."

The latter point is supported by the fact that overall alcohol consumption has been in decline in the UK for a number of years now. The only conclusion I can be certain about is that if this trend continues, women will probably overtake men in the not too distant future.
Posted by Neville Grundy at 12:36 pm

Email ThisBlogThis!Share to TwitterShare to FacebookShare to Pinterest
Labels: news