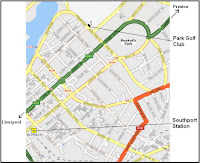 Family, friends and fellow campaigners will gather this Saturday to celebrate the life of George Strattan, veteran peace activist, folk singer and trade unionist who died in Southport last December aged 89. Tribute will also be paid to his late wife Viola, who worked tirelessly alongside George, particularly in the peace movement. The evening will be mostly musical, with spoken tributes from their son Richard, and representatives from CND and his union AEUW-TASS.
The musical line-up is still being finalised, but acts confirmed so far include Merseyside band the Peacemakers and regulars from the Bothy and Maghull Folk Clubs, with other performers trying to clear their diaries to be there. There will be a sale of George’s books, and CDs of him singing, with proceeds going to a good cause.  Richard has stated that he wants us all to have an evening of entertainment that George himself would have thoroughly enjoyed.

This event will take place at the Park Golf Club, Park Road West, Southport, PR9 0JS, (click on map to enlarge) on Saturday 6 February; doors at 7-00pm, and the music begins at 7-30pm. We expect a big turnout and ask you to arrive promptly if possible ~ especially if you want a seat!

If you knew George, whether through the folk scene, the peace movement, his trade union or any other way, you will be very welcome.

The Park Golf Club has a fully stocked bar and serves Thwaites real ale.
Posted by Neville Grundy at 12:39 am