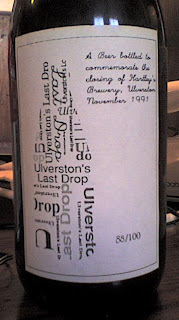 I've read on Tandleman's beer blog a post about his bottles of the last brews from Higsons Brewery in Liverpool and Greenalls Brewery in Warrington.  He's included a picture of the two bottles concerned, so you can see the old trade marks (the Greenall's trade mark was particularly attractive, unlike the beers which were decidedly mediocre).

The only such bottle I have is from Hartley's Brewery in Ulverston, named, as these often are, the Last Drop.  The difference with this one is that it wasn't produced by the brewery, but by CAMRA who bought one of the last casks to be brewed in Ulverston and bottled it themselves.  Word got around about the bottles of Last Drop, and people started phoning the brewery, who of course knew nothing about them at all.

Hartley's had been taken over by Robinson's of Stockport, who eventually closed down the brewery in November 1991 - no surprises there - but retained the pubs and the brands, which are brewed in Stockport to this day.
This bottle, numbered 88/100, was given to me  by Graham Donning, now organiser of the National Winter Ales Festival, but at that time organiser of the Ulverston Beer Festival, which I worked at for more than 15 years.  It's a nice souvenir of some good times.
Posted by Neville Grundy at 2:56 pm