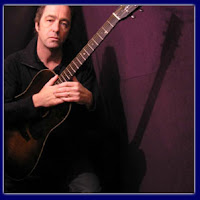 Dean Johnson has been described as "the best songwriter in Liverpool today" by no less a person than Radio Merseyside's Spencer Leigh, who certainly knows a thing or two.  Dean hit the news recently when he was asked to complete a fragment of a George Harrison song, "Silence Is Its Own Reply."  His completed version of the song has been generally well received. I think it's excellent and I can't see the join between the two songwriters' words.  You can hear it on YouTube, and also (even better) live in Liverpool next Friday.

Dean will be appearing at the Liverpool Acoustic Blues Lounge, which is hosted by local blues duo, Blue C.  The gig is this Friday, 4th December (doors 8pm ~ music 8.30pm prompt) in the View Two Gallery (top floor), Mathew Street, Liverpool.  This is likely to be a popular event.  Enquiries:  0151 709 5484 or e-mail Blue C.

If you're unsure where Mathew Street is, click on the map below to see a larger printable version.

Posted by Neville Grundy at 3:44 pm

Email ThisBlogThis!Share to TwitterShare to FacebookShare to Pinterest
Labels: blues, Liverpool, What's on