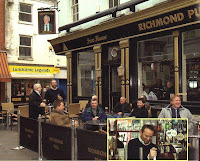 I met my friend Steve in Liverpool after we'd both attended the commemoration on 11th November in the Peace Garden in Liverpool. Naturally the word 'pint' sprang to mind. Chatting over a beer in the Ship and Mitre on Dale Street, we found that neither of us had ever been to the Richmond, a real ale pub in the heart of the city centre, so off we went.

The Richmond is on Williamson Street, which is close to Williamson Square. It is a small, narrow pub with an outside seating area where hardy smokers were ensconced. It was advertising beer at £2 a pint, with Everards beacon at £1.60, so definitely worth trying.

The beers on were: Moorhouses Pendlewitch, Draught Bass, Southport Golden Sands, George Wright Drunken Duck and Harviestoun Hoptober Festival. I was pleasantly surprised to see local brews there, including the award-winning Southport beer. Erdinger wheat beer was also on, and the pub boasted a wide choice of Scotch whisky. I thought all of this was quite impressive for such a small pub. As I walked in, I noticed and chatted to some fellow drinkers from Southport who were out on their weekly pub-crawl in Liverpool.

The beers we had were all perfectly fine, including the Everards, and its central location makes it very convenient to drown those city centre shopping blues. Its support of local breweries is a good reason to visit, and the pub advert makes it clear that this is policy, not just a happy chance when we visited.

Another to add to the long list of Liverpool pubs worth visiting.
Posted by Neville Grundy at 12:12 am