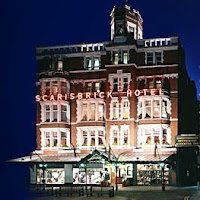 Southport's Sandgrounder Beer Festival has for the 10 years of its existence been held at the Southport Arts Centre. This will not be available for at least two years because of the lengthy closure and refurbishment of the arts centre, along with the adjacent library and art gallery. There was no question of the festival not being held, so a new venue had to be found.

The local CAMRA branch has agreed that the next festival will take place in the Barker Suite, an upstairs function room in the Scarisbrick Hotel on Lord Street, just across the road from the arts centre. This decision was made after a visit to see the room and discuss the festival's requirements with George Sourbutts from the hotel. The Scarisbrick is, of course, well known for its Barons Bar, which serves up to 10 real ales at competitive prices and has won CAMRA awards. This experience of real ale means they are well placed to host a beer festival.

So here's to another successful and enjoyable festival in September 2010!
Posted by Neville Grundy at 2:41 pm