Famous Grouse Whisky and the Sunday Telegraph have run a poll to find the top 100 famous pubs in Britain, whether they be famous for historic or just quirky reasons. Two Southport pubs feature:

The Fishermen's Rest, Weld Road. The pleasant name, which suggests fishermen having a relaxing pint after a hard day's work, has a much more tragic origin. It commemorates the Eliza Fernley lifeboat disaster of 1886 when the boat foundered while trying to rescue people from the stricken Mexico of Hamburg and 14 crewmen perished. Their bodies were laid out in here, then part of the Palace Hotel (demolished in 1969, except for this building). The lost men are recalled by the 14 small brass mermaids which hold the bar handrail in place. I attended a centenary commemoration of this tragedy in 1986 held in the pub itself.

It's a while since I've been in here, but I recall it as a pleasant and comfortable smallish pub; I've been told that its real ale range has recently been much improved, although I have yet to check for myself. 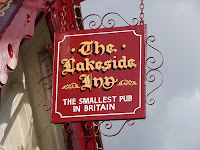 The Lakeside Inn, The Promenade. This pub is described as the smallest pub in Britain and has a Guinness Book of Records certificate on the wall. It usually sells London Pride and Tetley Bitter. It has fine views over the Marine Lake and outside drinking areas, including a balcony that overlooks the lake. It was, I believe, formerly the club house for a sailing club before getting a pub licence. I recall going in there with my friend Sam a few years ago during the Waterloo Cup, hare coursing's big annual event. It was full of Irishmen and women all drinking either lager or Guinness; Sam and I were the only ones drinking ale. What sounded like illegal betting was taking place by mobile phones, and one Irish gent asked whether we were down for the coursing. "No," I replied, "we just live here." The room went quiet for a couple of seconds, after which we were viewed with suspicion and no one spoke to us again, probably seeing us as potential saboteurs or interfering journalists.

I was in there with my guitar on Christmas Eve, when we had a singalong session, but the pub is most popular in summer, as you'd expect.

Other pubs listed in the poll include Ye Cracke, Rice Street, Liverpool 1, formerly frequented by John Lennon. Always a good range of ales in here, and the walls have pictures by local artists. One room has been called the War Office for over 100 years ~ it was where people who bored everyone by talking about the Boer War were banished. This was the first pub in the centre of Liverpool that I drank in (December 1972, as I recall). In the 1990s, my union branch committee used to drink in here after our meetings.

The Philharmonic, Hope Street, Liverpool is justly famous with its ornate architecture, carved wooden panelling, art deco gates and famous marble gents toilets. It also has several real ales on. It was built by the original Robert Cain brewery in the 19th century, but has no link to the modern Cain's brewery; you can still see RC engraved in the stone work outside. John Lennon once said that the price of fame was "not being able to go to the Phil for a drink". It's simply the most spectacular pub I have ever been in.

The Lower Angel, Buttermarket Street, Warrington, was where I sometimes used to drink when a student in the 1970s; it is a virtually unaltered pub. In the 90s it was run by Charlie Oliver, who used to to run the Old Ship on Eastbank Street, Southport. Charlie always kept a good pint, and although he no longer has the place, the beer was good last time I was in there.

The survey is a just a bit of fun, not to be taken too seriously, although I am surprised the excellent Marble Arch in Manchester isn't listed. You can find the whole thing here ~ why not look up where you live?
Posted by Neville Grundy at 4:34 pm