No change to drink-drive limit 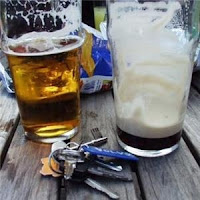 Common sense has prevailed in the discussion about lowering the drink-driving limits from 80mg of alcohol per 100ml of blood to 50mg, which would have brought us in line with much of Europe; the government has announced they will enforce the current law more rigorously rather than following Sir Peter North's recommendation to lower the limit.  Safety campaigners assert that such a measure would save around 160 lives per year, basing their assumptions on computer models, but these are quite logically only as good as the computer programming that creates them.  The full story is here.
The argument "if it saves only one life" isn't easy to argue against, especially when it comes from a bereaved relative, but most of the drink-drive casualties on the road are not caused by someone who drinks within the current limit - they are caused by people who habitually booze well over the limit before driving; such people would carry on drink-driving even if we introduced zero tolerance.  These are the ones that need stopping, not someone who carefully drinks within the legal limit.  To ignore such people, who are - it seems to me - only found out after they've had an accident, is to ignore the suffering and damage they cause and instead go after the easy targets.
I've no doubt that this will not be the end of the subject, as there are some people who won't be satisfied until there is a complete ban.  And then, while drunken drivers would continue cause mayhem by ignoring the ban completely as they do now, the campaigners would congratulate themselves on a job well done.

With police cutbacks on the way, let's hope the intention to enforce the existing limit more strictly isn't just politician's rhetoric, seeing that it is by far the more expensive option.
Posted by Neville Grundy at 3:50 pm