Moorhouse's trip + I missed my birthday!

I've only just realised that yesterday was the first anniversary of this blog. Still, I inadvertently celebrated it in good style. The Sir Henry Segrave, our local JDW, ran a coach to Moorhouse's brewery so we could see the old brew house before it is demolished and a much larger modern brewery is built there. On our arrival, we were given two Premier Bitter tokens and watched a DVD in the brewery tap, the General Scarlett, just across the road from the brewery. It's named after a general in the Crimean War. (I wonder whether earlier in his career he was known as Captain Scarlett?)
After the DVD, we were taken around the old brewery. It really is crammed to the rafters, in some instances literally, with brewing equipment; it's easy to see why a new building is needed. Working here must be an ergonomic nightmare: you have to bend almost double to get to some of the fermenting vessels. Our guide warned us not to slip on the stairs, often damp in a brewery, not like his health and safety officer who (he said) slipped on the stairs in high heels and broke her arm. The new brew house will be a tower brewery, apparently the first one to be built in Britain for many years. Our guide said that they intend to get CAMRA members in after it's opened to judge whether they've managed to recreate the taste of the beers. 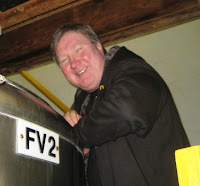 After the tour, back to the pub for our second Premier, all laid out ready on the bar for our thirsty return, and pie and mushy peas. With beer tokens used up, I went on to the Blond Witch and Pendle Witches Brew until it was time to go home, at which point everyone was given a pack with two bottles: Pendle Witches and Black Cat. We got back to Southport in time for a couple in the Sir Henry Segrave before they closed at midnight.
Everyone agreed that a return coach trip to Burnley, with two pints, a brewery trip, pie and peas and two bottles of ale for just £13 was an extremely good night out. The plan is to have another trip after the new brew house is open.
As for the blog, I have written 210 postings in the year, an average of 4 a week. Not too bad.
I'll be off to the singaround in the Mason's later. I must dust down my song about Ireland for St Patrick's Day, although I'll be drinking Unicorn, not Guinness.

The picture (added 18.3.10) shows me at one of the fermenting vessels.  Thanks to Sam for the photo.
Posted by Neville Grundy at 5:18 pm