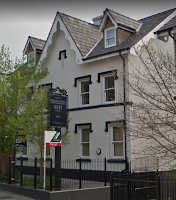 I was in Liverpool today with my car, which is unusual, and decided when my meeting ended to drive to the pub where I bought my first beer. The pub was called the Travellers' Rest*, down Aigburth Vale, a cul de sac (although we probably called it a dead end) near Sefton Park. Wearing our macs, convinced they concealed the school uniform underneath, we'd order our drinks and sit in the snug at the back. My first purchase was a half of mild for 10d. It was a regulars' pub and the beer was Tetley, which I felt some loyalty to as my Uncle Bernard ran a Tetley pub in Bootle. I still have the early 1960s pump clips for Walker's Mild and Bitter that he gave to me; the teachers weren't impressed when I brought them to school.

We had a code name for the pub, Vee's (no idea why), in case we were overheard mentioning it in school. We also had a code name for a local chip shop, T. Gong's, as we weren't allowed in chippies in uniform - T. Gong was actually the name of a laundry nearby. I suppose using code names made these ordinary goings on seem more dramatic.

I had decided I'd have one pint in the pub for old times' sake. I easily found the road and at first thought the pub had been refurbished and whitewashed; it even had a pub style sign outside, but it read Travellers' Court. The basic shell of the pub is still there, although barely recognisable, as part of a much larger complex of flats.

Although it's been almost 38 years since I set foot in the place, I felt rather sad.

The picture shows the way it looks now.

* Later amendment: I got confused. This pub was actually called Ye Olde House At Home. The Traveller's Rest was across the road, and is also closed; I never went into it.
Posted by Neville Grundy at 7:22 pm