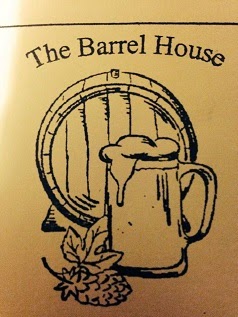 A few days ago, I went into Southport's newest bar: the Barrel House, which opened on 24 May at 42 Liverpool Road in Birkdale village. It has been converted from an old newsagent's because of the new Sainsbury's that has opened across the road; the owners felt that if they couldn't compete, they'd change their business. And what a change!

Although it is very small, you don't feel hemmed in: it has stripped wooden floors, wooden topped tables, a light, fern-patterned wallpaper, and a couple of tables in the windows that look out onto the street. At the far end is a bar with two handpumps and three beer fonts. When I went in, the real ales were Robinson's Trooper and Southport Sandgrounder; these change but always include one from Southport Brewery. I had both and they were nicely kept. The fonts sold Krusovice lager, Symonds cider and Theakstons smooth bitter. They also had a range of 10 red, white and rosé wines, some spirits, plus a choice of various teas and coffees. I believe food is planned too.

To one side there were shelves and beer fridges containing more than 140 bottled beers from the UK and the continent, and I was told by Martin, the owner, that the range is increasing all the time. One interesting bottle was Barbarian Bitter (4.2%) from the new Parker Brewery in Formby - I'll do a separate post about Parker.


As it happened there were several people I knew when I wandered in, and so had a very convivial evening; it wasn't busy, but that's not so surprising on a Monday. I’m not sure what you’d call the Barrel House - mini café bar would seem to be most appropriate - but it's certainly a welcome addition to the limited real ale scene in Birkdale. Opening hours are 10am to 10pm.

Oh, and they still sell newspapers!

This is part of a series of articles that I am writing for the CAMRA column in our local paper, the Southport Visiter. Previous reviews are here.
Posted by Neville Grundy at 6:39 pm