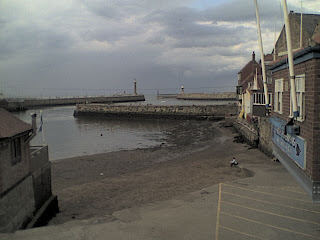 Whitby is a lovely town and has some charming pubs serving real ales to match. On the Tuesday of folk week we went on a pub crawl. I didn't take any notes during the week and cannot remember all the beers we had.

The crawl began at the Elsinore on Flowergate. This is a small, friendly one-roomed local that welcomes folkies and also Goths during their weekends. The cask beers on offer were Cameron's Strongarm and bitters from John Smith's and Tetley. At £2-52 a pint, the Strongarm was one of the cheapest pints in Whitby.

Next was the Little Angel across the road with a couple of real ales, one of which was Adnams. This pleasant little pub is worth a visit.

The Station Inn (formerly Tap & Spile) was next. This had eight real ales on, including Daleside Blonde, Copper Dragon IPA, Cumberland, Sharps Doom Bar, Whitby Black Dog (sadly no longer brewed in the town). I liked the Daleside and the Copper Dragon the best.

Crossing the river, we went to the Black Horse on Church Street. This is an unaltered narrow 2-roomed pub, but I can't recall what the 3 beers were. A quaint old pub, though.

Along the road is the Duke of York with 3 or 4 beers,the best of which was Copper Dragon, but it also had Deuchars and Bombadier. This pub is good for food; my favourite was the steak and ale pie. There are tables that have fine views over Whitby harbour; it's nice to sit there with a decent pint and a meal watching the sun set over the harbour.

Our final pub was the Shambles by the market square. This is a new pub, opened only a few years ago in a former Burberry factory building. It is spacious with great harbour views and it serves Theakson's beers and Copper Dragon Golden Pippin and IPA. This pub also does food; I haven't eaten there, but have been told it is good. The picture of the piers and lighthouses was taken from a window in this pub.

Other good pubs, but not on the crawl, are the Endeavour which had a changing range of 6 real ales during folk week, and further down the road the Middle Earth, which had Copper Dragon, but unfortunately ran out of real ale during the week; they must have underestimated the demand.

Being from the North West, I found the prices rather steep: in Whitby, I was paying £2-80 to £3-00 for beers I would normally pay around £2-30 to £2-50 in Southport. Two Sam Smiths pubs, the Plough and the Jolly Sailors, had Old Brewery Bitter for under £2-00, but owing to the eccentricity of the brewery, there can be no music in these pubs as they refused on principle to buy the new-style licences 2 or 3 years ago. I don't understand a principle that turned the Plough from a large pub that was heaving during the 7 days of folk week with music sessions in 3 separate rooms and another in the large back yard, weather permitting, to one that looked almost deserted most of the time. Doesn't Sam Smiths want to make money?

I'm not sure what the beer ranges would be like out of season. However, prices notwithstanding, I like the pubs in Whitby and found the beers were generally well looked after; I would recommend a visit to this picturesque town to anyone.
Posted by Neville Grundy at 6:44 pm