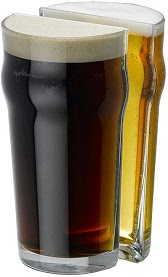 I've just come across this picture on a website called the Fowndry (sic) which at great expense will provide you with toys like these half pint glasses. On the thread below, one person has written, "Brilliant,Freakin Brilliant!!!!!!!!!!!!!!!!!" and another, "Awesome!!!" My own assessment is "Mildly amusing", without a plethora of exclamation marks.

However, it did get me thinking about halves. I tend not to drink halves, except perhaps at the end of the night as a final top-up. It is often said that you drink halves at a faster rate than you do pints because after a couple of mouthfuls, there doesn't seem much left, so you're more inclined just to down the remainder.

Yesterday I spent the day in Liverpool at a friend's wedding. When I returned to Southport, I had a less than a quarter of an hour wait for the last bus, and so popped in the Tea Rooms in Birkdale (a bar, not a café) for a swift half of Wainwright. I drank it and left with more than five minutes to spare. I'm certain that if I'd ordered a pint, I wouldn't have drunk anywhere near a half of it by that time.

I appreciate that a sample of one isn't scientifically valid, but it does seem a common perception that halves go down at a faster rate than pints. If that's the case, then if you used halves only, you'd sell more beer. Is that the reason, I wonder, why it seems that CAMRA beer festivals are increasingly supplying half pint glasses only?

To my mind, the dark beer on the left is a short measure.
Posted by Neville Grundy at 4:31 pm 5 comments:

Here's another band to have their own real ale: Radio 2's favourite folk band, Bellowhead, is to have their own beer called Revival, named after their latest CD. It will be brewed by Harvey's to celebrate the 10th anniversary of the band. The brewery states that it is the first of their beers to be available on national distribution. I can find no description of the beer other than it is "a new golden ale, brewed using Sussex hops".

The band is noted for its big sound (there are 11 of them) and they intend to do sessions in pubs serving Revival after their gigs on the forthcoming tour. As I recall, Status Quo did a tour of pubs about 15 years ago, and they have recently acquired their own beer, Piledriver brewed by Wychwood. A real ale and a folk-based band do seem to go well together (or in modern jargon "are a good fit").

I'll try it if I see it anywhere, but as its strength is 3.7%, I can't see myself getting too excited.
Posted by Neville Grundy at 6:18 pm 1 comment:

Nailing the lid down

I don't normally subscribe to the "what's gone wrong with the world" way of thinking, but I did a bit when I saw this sign, which was placed outside the Black Lion pub in Leighton Buzzard, Bedforshire. Not the actual sign itself, you understand, but the reaction to it. It is obviously a jokey way of asking parents to ensure their children behave without putting up heavy-handed notices along the lines of: "Children must be kept strictly under control".

Apparently complaints have been posted on Facebook, including from one moron (anonymous of course) who said: "Personally I find this sign disgusting. [The licensee] should be arrested for promoting child abuse and closed down by Trading Standards for the same offence." The editor of the Babyworld website said it is important young children are "exposed to social events" such as pubs and restaurants, which is okay in itself, until she added that she thought the sign was aggressive.

Two different licensees I've chatted to both told me they have had to chase after children running out of the pub doors into busy streets while their parents chatted and drank oblivious of the danger to their little darlings. One of them got so sick of doing so that she banned children altogether. Even without the element of danger, it's strange how some parents can't see that noisy children running wild in a pub annoy most other customers, or perhaps they simply don't care. I'm not hostile to children in pubs, but I have turned round at the door and walked out when faced with a noisy room that resembles a crèche more than a public house.

Most pubs are not great places for children. It's fine for a short time, especially if there's a meal, but when they understandably get bored, the parents should put the other customers as well as their own children before their own wish to continue drinking. If they want to carry on, they should take some booze home. The Black Lion doesn't serve food and there's no TV or music, so there aren't any distractions for kids; all the more reason to watch out for them becoming restless.

Anyone who gets offended by this sign really is a humourless moaner. As for Trading Standards, the only grounds I can see for them taking action is for false advertising on the basis that the pub doesn't actually nail children to the tables.

To be fair, a lot of the regulars have leapt to the pub's defence and are delighted with its 15 minutes. One wrote: "Better idea nail the parents they caused the problem !!!"

"If you don't have humour, then you may as well nail the coffin lid down now." Roger Moore.
Posted by Neville Grundy at 4:29 pm 20 comments:

Yet another study demonstrating the health benefits of alcohol. Dr Simona Costanzo was speaking at the European Beer & Health Symposium in Brussels which took place this week. She stated that men could have up to four drinks a day, and women up to two without increasing their chances of developing heart problems. She explained that studies had consistently shown a “protective effect of regular and moderate alcohol consumption against fatal and not fatal cardiovascular events and mortality for any cause”.

She added that research had proved that teetotallers and heavy drinkers were at the highest risk of heart problems, while moderate drinkers were at the lowest end, explaining that, “We have lots of evidence that shows moderate and regular beer consumption is protective. One or two beers a day reduces the overall risk of dying young.” Furthermore, it seems that the health effects of wine and beer are comparable, contrary to the common perception that wine is healthier.

She said the hazards of binge drinking still needed to be explained, but that people with heart problems should be advised of the risks associated with complete abstention from alcohol. Not the kind of message out friends from Alcohol Concern would particularly welcome, but that's life.

With more and more studies disproving the contention that alcohol is the root of all evil in society, how much longer can the government persist with its current anti-alcohol stance, which is largely determined by the zealots of Alcohol Concern, which is itself mostly funded directly or indirectly by government - thus completing a self-perpetuating (and, in my opinion, corrupt) circle?

I see in yesterday's Guardian that drinkers who have half a bottle of wine or three or four pints a night are to be offered a pill which helps reduce their alcohol consumption. It is estimated that nearly 600,000 people will be eligible to receive the nalmefene tablet which works by blocking the part of the brain which gives drinkers pleasure from alcohol, stopping them from wanting more than one drink.

Predictably, "experts" claim the drug could save as many as 1,854 lives over five years and prevent 43,074 alcohol-related diseases and injuries. I'd like to know the rigour of the methodology that produces such precise figures. There's nothing wrong with treating people who have problems with alcohol, and if this pill helps some people, all well and good. I do think, though, that a threshold of 3 pints or half a bottle of wine is rather low.

What irritates me is the mea culpa attitude of certain people who, having lacked any self control themselves in the past and frequently ended up in a mess, then seem to think that makes them an expert with a special insight into drinking. The comedian Frank Skinner is one such, and another was Guardian columnist Hugh Muir who wrote in an article about the new pill:

"When you’ve suffered ulcers at 21, principally because you drank too much on a regular basis and didn’t make time to eat, you tend to take an unmoralised stance on those who drink too much alcohol. When you’ve tried and failed to get off the Central Line before being sick after a night’s boozing, you see the issue in a certain way. When you’ve woken in strange places, strange beds, travelled comatose around the entire Circle Line for a couple of hours, thrown up from taxi windows … you have the sense that the human capacity for self-control is sometimes superceded by the craving for our national stimulant of choice. These are my war stories as a young journalist in the hard drinking days of our profession in the 1980s and 1990s."

I've been drinking for quite a lot longer than Hugh Muir, but I have never ended up in the kinds of scrapes he describes. No matter how much I've had, and there have been times when I've had a lot, I've always got myself home or to where I was supposed to be, taken my contact lenses out and put them in their storage case, got undressed and gone to bed. The fact that he drank himself into such ludicrous states means he is not a typical drinker.

He does make the point that you can't expect a pill to resolve all the country's problems with drink, but do we need a journalist to state the obvious? It is worth pointing out that the original article stated that NICE (the National Institute for Health and Care Excellence) recommended the use of the drug because trials showed "it cut drinking by 61% over six months when used with counselling" (my emphasis). So, how much of the pill's success can be attributed to the chemicals, and how much to the one-to-one attention the patients received in counselling sessions? No way of knowing.
Posted by Neville Grundy at 6:24 pm 5 comments:

Sorry, I should have posted this earlier about the Bothy's guest singer tomorrow night (Sunday).

Jim Causley is a folk singer and musician from Devon who specializes in the traditional songs and music of the West Country. Hailing from the village of Whimple in East Devon, he was born in Exeter and is a relative of the Cornish poet Charles Causley. His 2013 album Cyprus Well is based upon the poetry of Charles Causley, who died in 2003.

In 2006, he was nominated for a BBC Radio 2 Folk Award under the Horizon Award (best newcomer) category and the following year his vocal trio, The Devil's Interval, who have previously played at the Bothy, were nominated for the same award.

He's appearing on Sunday 5 October at 8.00pm at the Bothy Folk Club, which meets at the Park Golf Club, Park Road West, Southport, PR9 0JS. Real ale from either Thwaites or Southport breweries.

Posted by Neville Grundy at 3:08 pm No comments:

The Southport Beer Festival is getting close now - next weekend in fact. It's close to the town centre and less than 3 minutes' walk from the railway station. I'll be posting the beer list in the next day or so. You'll find more information here. 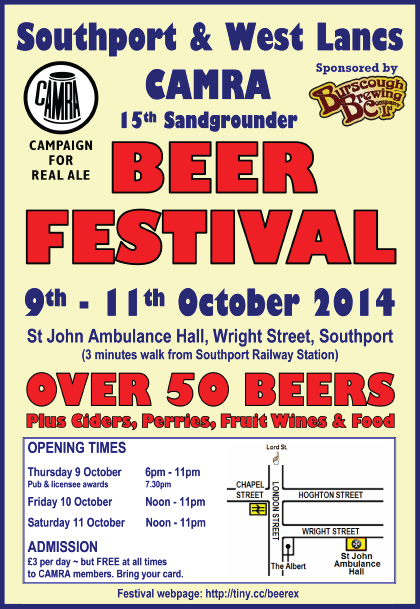 Posted by Neville Grundy at 5:09 pm No comments: