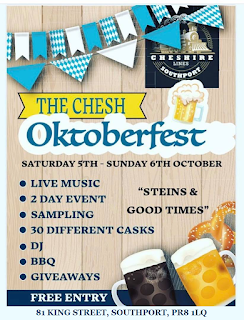 On an impulse, I decided to pop into the Cheshire Lines on King Street, Southport, last weekend and was greeted warmly with the news of their forthcoming beer festival. The Chesh, as it's generally known, is a good real ale pub with four handpumps regularly in use, and the beers I tried on this visit were in good condition.

On Saturday 5th and Sunday 6th October they'll be putting on the Chesh Oktoberfest promising “Steins & Good Times” with thirty different casks, so there will be plenty of scope for sampling various beers. This two-day event will also feature live music from six bands, an outdoor bar, a DJ, a barbecue and various giveaways – all a mere two minutes' walk from Lord Street.

The Chesh is also popular for its food for which it gets good reviews on TripAdvisor, so you will be well-served if you get peckish after a few pints. Entry is free; not one to be missed. Tel: (01704) 546565. 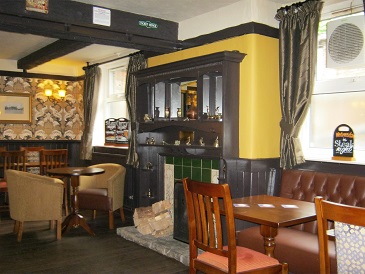 Posted by Neville Grundy at 5:24 pm No comments:

Song and music sessions to the end of October

At singarounds and music sessions, you can perform, sing along or just listen to suit yourself. All venues serve real ale, and all events are free, unless otherwise stated.

I first learnt about the Vestry Tap Room after they had contacted the local CAMRA branch. It has been open for around six months.

I caught the 2 Stagecoach bus on Lord Street and about 40 minutes later was dropped off right opposite the pub. It was empty when I arrived except for Lisa behind the bar, although it did fill up later. Lisa was very helpful and patient as she answered all my various questions.

The main room is light with wooden walls to waist height and wooden furniture, including bench seating along the walls. There is also a comfortable room upstairs with easy chairs, and an outdoor drinking area to the rear of the building.

Three hand pumps were serving Avid Brewing Co. American Pale, Hawkshead Windermere Pale and Brewsmith Bitter. These beers are always changing and those due on next were from Polly's Brew Co., Tiny Rebel, Siren Craft Co. and Squawk Brewery. A real cider, Lilley's Rhubarb Cider, is also available. On Sundays, the real ales are reduced by 25% between noon and 4.00 pm. All three real ales were in good condition.

There are also lagers and craft beers, including a rhubarb milkshake pale called Rhubarbra Streisand! Other drinks offered include a large gin selection, canned craft beers and bottles of BrewDog Punk IPA.

On Tuesdays at 8.00 pm, a speed quiz is held, and Lisa had to explain to me what that actually was! Live music is presented once or twice a month between 5.00 and 9.00 pm on Sundays – next time is 29 September - and occasionally free cheese boards are offered, also on Sunday. Live sports are sometimes shown.


On Friday 4 and Saturday 5 October they are putting on an Oktoberfest with an oompah brass band, imported German beer, gins, authentic German street food, live music and a DJ in a large marquee. It is a ticket-only do, and there aren't many left so if you're interested phone 01772 301976 to check.

The premises are not suitable for under-18s, but dogs are admitted. They have free WiFi, and are on Facebook where you can check the opening hours which do vary through the week. You'll find it at 109 Church Rd, Tarleton, Lancashire PR4 6UP.

► This is one of a series of articles that I write for the CAMRA column in our local papers, the Southport Visiter and Ormskirk Advertiser. Older articles on local pubs are here.
Posted by Neville Grundy at 3:47 pm No comments:

Real ale 'isn't dear enough' and it's all our fault!

A couple of months ago I picked up the summer issue of Ale Cry, the magazine of the CAMRA Central Lancs Branch. It's an interesting mag, and its layout and presentation are much better than a few years ago when, although the articles were okay, it looked like a badly-produced college rag mag. One article grabbed my attention, 'The Price Of Your Pint Revisited', written by the editor Adrian Smith - you can read the article concerned here (on page 22).

The general thrust of the article is that we drinkers are reluctant to pay what he considers a fair price for real ale with the consequence that real ale may be "dumbed down" to save costs, or discontinued altogether. He makes some international comparisons, but comparing our beer prices with those in other countries is of little value unless you also compare average incomes, taxation levels, duty, and indeed all the many other factors that affect what we British drinkers pay.

He also has some scathing words for Wetherspoons and the vouchers that they give to CAMRA members, describing this membership benefit as CAMRA encouraging members to visit JDW pubs at the expense of traditional pubs, even though it is actually funded by Wetherspoons, not CAMRA. The value of the vouchers, £20 per year, equates to 39p per CAMRA member per week, not an amount, I would suggest, that would drive traditional pubs to close, especially as 99.7% of the UK population are not CAMRA members.

Many organisations have benefits for members provided by outside businesses; indeed, some of the membership benefits I am entitled to claim, in addition to those via CAMRA, come through my trade union, the National Trust, my railcard, my car breakdown service and even my folk club. Furthermore, there are 17 other companies that offer perks to CAMRA members, some of them in the beer and hospitality industries - but there's not a word in Ale Cry bemoaning any of those. Besides, there is absolutely nothing to stop any other pubco making similar offers.

At this point I wondered whether I was beginning to detect the anti-Wetherspoons snobbery that, regrettably, some CAMRA members are prone to, a perception reinforced by a statement in the Ale Cry article that, "Real ale on sale at £2.09 a pint is frankly ridiculous". Why? Wetherspoons are making a profit, so if they can afford to sell beer at such a price, why shouldn't they? Perhaps it's the perception of the clientele that Wetherspoons' prices are said to attract: people on benefits, parents with screaming brats running wild and pensioners drooling into their cheap meals, all of which shameful slanders - and more - I have read too many times (although not in the Ale Cry article). I consider such generalisations about Wetherspoons clientele both inaccurate and disrespectful.

CAMRA says that avoiding isolation by going to the pub is a good thing, but without Wetherspoons, many people on low incomes could rarely, if ever, afford to go out for a pint; they would certainly have no chance of paying the price for real ale that Adrian Smith thinks they should.

I've written before about the price of beer, most recently in June 2018 here. One point I have made several times is that in 1972, a pint of bitter here in the north west was around 13p or 14p. Using the Bank of England inflation calculator, I learned that 14p back then is equivalent to £1.82 in 2018. In recent years, and especially since 2010, ordinary people's incomes have definitely not increased correspondingly. In real terms, beer is nowadays markedly dearer while many people's incomes are lower. It's logical to assume this is a significant reason why drinkers are reluctant to pay more for real ale, but the Ale Cry article makes no mention if it.

A list of factors affecting pub usage, the level of beer prices in pubs and what people can afford would include (in no particular order):
In the face of all this, it seems perverse and facile to criticise the drinker, and I am surprised that the editor of a drinkers' campaigning magazine does so. I did e-mail him a couple of months ago making some of these points but received no reply.

► For information, the Wetherspoons voucher scheme is currently being replaced.
Posted by Neville Grundy at 4:51 pm 11 comments:

I was chatting to Dave in the Lion Tavern in Liverpool on Tuesday; I was there for our monthly singaround. He was telling me the the current licensee of the Dispensary on Renshaw Street, also called Dave, is retiring.

I wrote about this pub almost exactly 6 years ago on 19 September 2013: "This pub has won Liverpool CAMRA's Pub of the Year award in the past, and I have spent happy afternoons and evenings there. The licensee once took the mickey out of me when he saw me at the bar writing down all the beers that were on. He obviously didn't believe me when I told him I was making notes for my beer blog."

He actually declared in a loud voice that "We've got another ticker in!" One thing I am not is a ticker, but I took it as banter, even though Dave's reputation was such that I doubt he'd have been bothered if I had been offended. His approach to customer service has been described as eccentric, but I always found that the beer was on good form.

Dave in the Lion told me that the Dispensary will now be focusing on craft ales and cocktails and that no real ale has been included in the next order. This is a shame, and I see no reason why a pub cannot sell both craft beer and real ale, as the Tap & Bottles in Southport does. 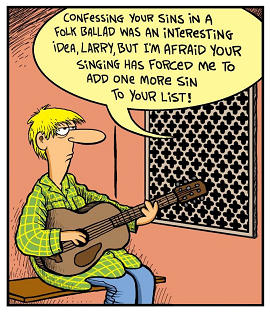 All events are free, unless otherwise stated. At singarounds and music sessions, you can perform, sing along or just listen to suit yourself. All venues serve real ale.