I had a strange dream last night. A woman was holding up a Higsons "Famous Old Higsonians" beer mat with a sign that said: "Will exchange for sex."

This puzzled me for a while.

Then the truth dawned on me: until I'd had that dream, I had no idea that I had such an unrequited, deep-seated and subliminal desire to own Old Higsonian beer mats.
Posted by Neville Grundy at 3:19 am No comments:

I decided to hop on the 49 bus to Churchtown to have a look at - and a drink in – the new branch of Peaky Blinders which opened in March 2018 in an old bank. It has an L-shaped bar with modern furnishings, including some tall tables and stools, and large windows overlooking the road. It is light and airy, with walls decorated with a reproduction of old newspaper adverts and cuttings.

There is a outdoor drinking terrace on two levels to the front where smoking is permitted. A disability ramp can be reached on the right hand side of the building as you face it, where there is also a cash machine, a relic from its days as a bank. One thing I didn't realise until my visit is that they offer accommodation.

It has four handpumps which, when I called in, were serving Timothy Taylor's Landlord, Black Sheep Bitter, Cross Bay Blonde and Bowness Bay Amazon Amber. I found all to be in good condition. This range does change, although I was told the Taylor's is often on.

Non-real beers included Löwenbräu and Weihenstephaner Bavarian-style Weissbier. They have a choice of wines and their own range of spiced gin, rum and whisky; I noticed on the hot day I was there that various gin drinks piled up with ice were flying over the bar. They serve food until at least 7.00 pm: reasonably-priced light bites, paninis, and cheese or meat platters.

When I rolled up, the friendly bar staff were cheerfully singing along to Beatles songs on the bar's sound system, although other musical eras are available. There is a television and free WiFi for customers; families, including your canine pal, are welcome.

Peaky Blinders is at 145 Cambridge Road, PR9 7LR, close to the 49 bus route and the buses on Cambridge Road. Its opening hours are 10am to 11.30pm every day. Website.

This is one of a series of articles that I write for the CAMRA column in our local papers, the Southport Visiter and Ormskirk Advertiser. Previous write-ups are here.
Posted by Neville Grundy at 6:11 pm 4 comments:

I see that the Cains name is to be revived with a new brewery set up within the old Higsons Brewery building where the most recent incarnation of Cains was brewed until 2013. Its disappearance wasn't much mourned, following as it did a drastic and sudden drop in quality; I wrote about it at the time here.

An entrepreneur called Andrew Mikhail, owner of bars and hotels in Merseyside including Punch Tarmey's, has acquired the name and states that the brewery will create 200 jobs and "partly model itself" on the Guinness Brewery visitor attraction in Dublin. If the 200 jobs do materialise, it would be a fairly sizeable operation.

The big old Higsons brewery building, Grade II listed, is being developed into a brewery village, which I wrote about in 2013 here. Mr Mikhail has given no indication yet whether he will revive the previous Cains beers or start from scratch with new recipes, as the latest manifestation of Higsons has done. I tried one of the new Higsons beers recently and didn't think it was anything special.

I'd be very surprised if this announcement will engender much excitement locally, but I'll save my judgement until I've tasted the product. This will be the second revival of the Cains name. The original Cains ceased to be brewed in Liverpool in the 1920s, but the name was called out of retirement in 1991. As for Higsons, we are now on the fourth version, if you include the original that was destroyed by Whitbread. I wonder how many times you can resuscitate a brand before its credibility evaporates completely?

Generally I don't see much point in using an old name and producing beers that have no resemblance to the originals; it's simply cashing in on brand nostalgia, but I suppose there's no harm in it because your beers will have to stand or fall on their quality: people won't sup solely for nostalgic reasons indefinitely.
Posted by Neville Grundy at 9:14 pm 2 comments:

While sorting out some books in preparation for a house move, I came across a 'Merseyside Guide To Real Ale', published in 1985, a booklet I'd completely forgotten about. It cost 50p (£1.53 now, so it was quite a bargain) and is a fairly slim volume which could easily slip into a coat pocket. As was usual in those days, the pub descriptions were rather sketchy, but I think it's safe to assume, in an age when beer choices rarely changed in pubs, that the beer situation was accurately described. This was published four years before the Beer Orders which turned the pub world in its head.

Looking at Southport, where I lived then as now, there were 25 pubs, bars, clubs and hotels listed as serving real ale. There were quite a few more non-real ale pubs, of course. In contrast, off the top of my head I have counted 41 outlets that currently serve real ale in the same area, and there may be one or two others that have slipped my mind. 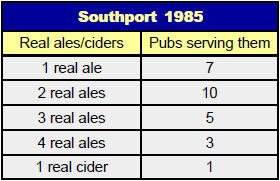 Most of the beers sold in pubs were from the brewery that owned them and, as the chart shows, most pubs had only one or two real ales on. Nowhere had more than four real ales, and only one real cider was listed (Bulmers Traditional). In contrast, serving four or more real ales is quite commonplace in the town nowadays, with a few venues hitting the eight to eleven range. Real cider is still fairly uncommon in Southport, but at least we can do better than just one.

Unusual beers for the time in this area included:
All the rest were standard house beers from Allied Breweries, Bass, Burtonwood, Whitbread, and Matthew Brown/Theakstons. I know there was a couple of Greenall Whitley houses but I presume none sold real ale. As variety goes, this all looks fairly tame today, even the comparatively 'unusual' choices, although it's worth noting that in 1985, Pedigree, County and Boddingtons were much more highly rated than they are now.

It strikes me that, in all the doom and gloom over pub closures - and some venues listed in this guide have since been lost - we may forget that overall the situation is a lot healthier in terms of choices of beers and places to drink them than ever before, largely due to the numbers of micro-breweries and the rise of micropubs and other bars serving real ale.

I am not blasé about losing traditional pubs, and I know that some people consider the market is over-saturated with breweries and micropubs that may not survive in the long term, but despite all that, I can simply say that I much prefer to drink in today's Southport than that of 1985.
Posted by Neville Grundy at 1:52 pm 2 comments: