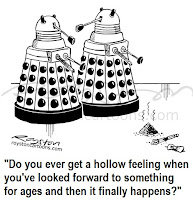 This cartoon tends to sum up how I view CAMRA's Revitalisation Project. Not that I was looking forward to the process - I wasn't particularly - but I recognise the feeling of something built up as being massive, only to think "Is that it?" afterwards.

This is what can happen with hype: reality often doesn't match the big talk. The changes CAMRA has adopted are significant certainly, but they are not the earthquake that some predicted. Neither are they a damp squib as claimed by others.

As a member, I sometimes listen politely to non-members pontificating about what CAMRA should be doing. When asked why the Campaign hasn't fully accepted craft beers, I've sometimes pointed to the name, Campaign for Real Ale; a campaign for something doesn't entail being anti-everything else. No one expects the Cats Protection charity to accept dogs, but that doesn't mean they're hostile to our canine pals. To be fair, the 'name' argument only goes so far, seeing that the Campaign has long accepted cider and perry but hasn't changed its name to CAMRACAP, which is just as well.

While I accept everyone has a right to an opinion, the Campaign and its members are not required to take notice of anyone but its own members, who after all are the ones who pay the bills. This isn't arrogance: most membership organisation operate on this basis, from trade unions and political parties to the National Trust - all of which I belong to. I'm not saying such organisations should always completely ignore what non-members say - simply that they're under no obligation to take what is said on board if they don't wish to. Ultimately, if you want a guaranteed say, put your money where your mouth is and pay the subs.

I don't think we need take too much notice of all of the predictions about where the changes will take the Campaign - the sheer variety of opinions suggests to me that the only forecast anyone can make is that none of us has any real idea where we'll end up. My own view is that, in the short term at least, things will mostly tend to go on much as before. Craft beer will appear at some CAMRA festivals - that's not really a big deal in the great scheme of things - but it is an inescapable fact that the Campaign is genuinely a bottom-up membership organisation whose activists on the ground are the same people as before the national AGM.

As CAMRA's new national chair Jackie Parker has said, "It's easy to tell others what they should or could be doing, when you have no responsibility or accountability for actually delivering what you say needs to be done." Quite.

I did write an article about the Revitalisation Project for the CAMRA column in the local papers, but it has little resemblance to this post; being based on a CAMRA press release, it's considerably more anodyne.
Posted by Neville Grundy at 2:03 pm No comments:

A more than adequate replacement

I'd been arranging a trip for some friends to the CAMRA Bolton Beer Festival this Saturday when someone pointed out to me that there is a problem with the trains that weekend. When I checked the train times on National Rail Enquiries about 10 days ago, no problems were reported.

Looking again yesterday, I see that the trains will be going past Bolton to Manchester, after which you need to get off and catch the train back to Bolton, thus adding an hour to the 45-minute journey - each way. Needless to say, I've called that trip off as I've no wish to spend 3.5 hours travelling to and from a beer festival that's less than 30 miles away.

Instead I've suggested we go to the excellent Wigan Central, Wigan CAMRA's Pub of the Year and a finalist in the CAMRA National Pub of the Year competition, which should be good. A more than satisfactory replacement trip, I feel.

Tickets available on-line, at the Bothy Folk Club on Sundays,
or on the night, subject to availability. 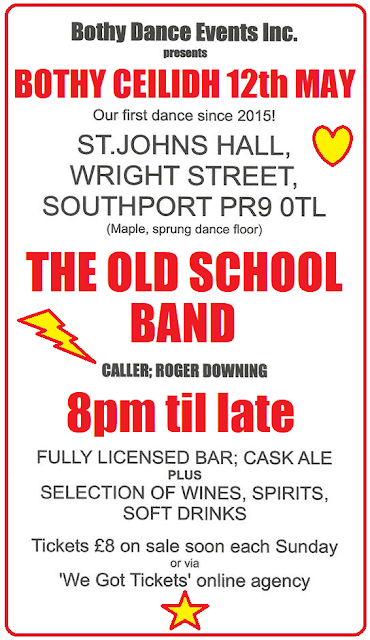 Posted by Neville Grundy at 1:05 am No comments:

Email ThisBlogThis!Share to TwitterShare to FacebookShare to Pinterest
Labels: Bothy, ceilidh, What's on

I hadn't heard about the Cocoa House in Southport until a couple of friends mentioned it to me, so I thought I'd better pay a visit. I found out that it has been open for several months; it is easy to find, being directly across the road from Sainsbury's on Lord Street. A long narrow drinking area, wood-panelled to waist level, takes you through to a larger room with an intricate moulded coving around an attractive old glass ceiling. The name of the bar comes from the fact that it was originally a cocoa warehouse.

There are three handpumps, two for real ale and one for cider. When I called in, they were serving Formby Blonde, which was in good condition, and the other handpump had been serving Monument from Southport Brewery, which had been put on the previous day and had sold out by closing time. They are working on building up the real ale sales. The handpumped cider was Gwynt y Ddraig Happy Daze medium.


They stock a good choice of gins, including one I hadn't seen before, Isle of Colonsay. There are also good choices of whiskies, wines and cocktails. Craft beers include Grimberger Blonde, Shedhead American Pale Ale and Brooklyn Lager. In keeping with the name of the establishment, you can even enjoy a hot chocolate made with shaved Belgian chocolate.

You can listen to live music every Saturday evening, and sometimes on Fridays or Sunday afternoons: I've seen a couple of good bands there, including a female three-piece I hadn't heard of before called the Midnight Daisies.

Food prepared on the premises is available from midday every day until 2.30pm Monday-Thursday and 4.30pm Friday-Sunday. They even cater for your canine friend by providing dog biscuits. Children are also welcome. They are planning to bring the rear yard into use as an outdoor drinking area.

There is free Wi-Fi and a Facebook page. They open at 11.00am every day and close at 7.00pm Monday and Tuesday, 10.30pm and Wednesday and Thursday, midnight on Friday and Saturday and 8.00pm on Sunday. The address is 459 Lord Street.

This slightly unusual venue has an interesting past, I found the staff and customers to be friendly and I've enjoyed my recent visits.

Slightly adapted from one of a series of articles that I write for the CAMRA column in our local papers, the Southport Visiter and Ormskirk Advertiser. Previous write-ups are here.
Posted by Neville Grundy at 1:12 pm No comments:

Enjoy the Golden Age - while it lasts!

I recently read an article about a long-gone brewery, Gales of Hampshire, and was reminded of how I used to enjoy their beer when visiting family in the South. On one occasion in the 1980s, I was taken to a pub with a row of six handpumps, each serving a different Gales real ale. In those days this was an extremely rare sight and I said to the landlord, “A pub crawl without leaving your bar stool!” He replied that many had tried to drink them all but few had succeeded.

This incident came to mind when I was chatting recently to staff in a local pub that had ten handpumps serving real ale, and I thought how a bank of six handpumps, which had seemed extraordinary more than 30 years ago, was quite unremarkable today. I said that many years ago I had been a student at a college near Warrington where our beer choices were confined almost exclusively to mild or bitter, either from Greenall Whitley or Tetley Walker, and that their pub now had a greater choice of real ales than the entire town of Warrington back then.

Unlike other facets of life, for real ale there is no Golden Age to look back upon nostalgically. Fifty years ago (before my drinking career began), breweries were switching to mass-produced keg beers and many were phasing out their real ales, which at that time were mostly just mild and bitter. CAMRA, founded in the 1970s in response to this trend, is generally recognised as having saved real ale in this country. While we regret the closure of many old pubs – sadly, quite a few locally (Southport and West Lancs area) - and the loss of some favourite old brews, for real ale drinkers the Good Old Days are now. We can help keep it that way simply by continuing to enjoy the great variety of British beers now readily available.

Did I manage to try all six beers in the Gales pub? Of course. And for the record, the real ale scene in Warrington is much better nowadays.

This is one of a series of articles that I write for the CAMRA column in our local papers, the Southport Visiter and Ormskirk Advertiser. Some previous articles are here.
Posted by Neville Grundy at 1:26 pm 4 comments: 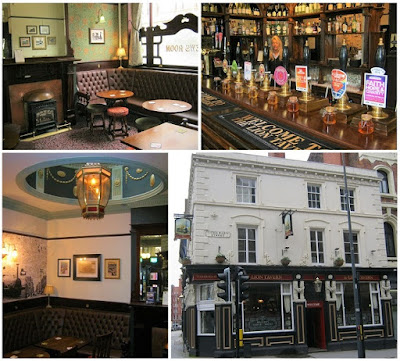 The Lion Tavern is a beautiful mid-Victorian pub in Liverpool just across the road from Moorfields Station and is very much a miniature gin palace from the original Robert Cain Brewery. There is a bar and two lounges, prominently featuring wood panelling, etched glass, impressive old tiles and an unusual, but quite lovely, glass dome. The pub has recently been carefully refurbished, and it tends to attract a varied clientele: it is particularly popular with local musicians to the extent that the free jukebox has music by twenty six artists who have enjoyed drinking there.

There are always eight real ales, with the house beer, Lion IPA, from Red Star as standard, and seven changing guest beers which, when I called in, were: Faith Hope & Charity and Bottle Bull, both from Rock The Boat; West Coast IPA and Monkeytown Mild, both from Phoenix; Peerless Langton Spin; Ossett Silver King; and Black Edge Hop. There are always four light beers, three amber and one dark to satisfy most tastes, plus a real cider, Westons Founder's Reserve. Their entry in the 2018 CAMRA Good Beer Guide is well-deserved. Other specialist drinks include wide choices of Scotch and Irish whiskies.

There is a monthly acoustic song session on the second Tuesday; this is open to all and is unamplified so there's no danger of being deafened. The hand-raised pork pies are popular with customers. Well-behaved dogs are welcome.

As well as being a classic pub by anyone's standards, the Lion is quite happy to do things slightly differently from the mainstream, and it is a formula that is popular with its own regulars, real ale connoisseurs in Liverpool and beyond, local business people (being in the business area of Liverpool) and discerning football fans on match days.

The Lion is on Facebook, Twitter and has a website. It is close to several bus routes and can easily be reached by train from the Southport and West Lancashire areas. Definitely worth the train ride.

This is one of a series of articles that I write for the CAMRA column in our local papers, the Southport Visiter and Ormskirk Advertiser. Previous reviews are here.
Posted by Neville Grundy at 2:10 pm No comments: