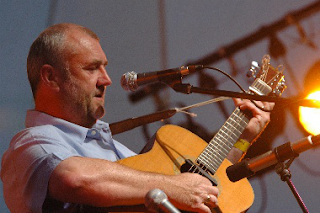 A great afternoon concert hosted by Pete Rimmer.
Part of the Southport Festival - 10 to 12 May.

What they're saying about Bob Fox:


"Fox always was one of the scene's superior singers and his voice is as confident and ebullient as it ever was." - Colin Irwin - Folk Roots Magazine

"Bob, in my view, is a greatly under-rated singer and musician, if he were pushier he'd be up there with the Carthys and Gaughans and he could certainly teach the upcoming generation a thing or three!" - Raymon Greenoaken - Stirrings Magazine

"The most complete male folk artist on the British folk scene, his voice and singing style is envied by many of his contemporaries." - Colin Randall -The Daily Telegraph

"As soon as I heard him sing I realised that Bob Fox must have one of the best voices in England, he is an artist of great ability and integrity." - Ralph McTell
Posted by Neville Grundy at 8:34 pm No comments: 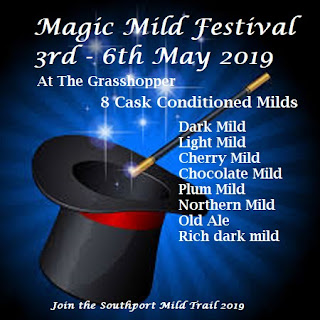 As I wrote on 17 April, CAMRA Southport & West Lancs' contribution to 'May is Mild Month' is to run the Southport Mild Trail throughout May in conjunction with eight great local real ale pubs.

One of those pubs, the Grasshopper in Sandon Road, Hillside, will be taking the concept further and will be holding its own 'Magic Mild Festival' over the May bank holiday weekend, 3rd to 6th May. They will be offering eight different cask milds from various breweries including:

The full range of blonde, golden and bitter beers will still be available as usual. There will also be music, a barbeque and Morris dancing.
Posted by Neville Grundy at 3:21 pm 2 comments: 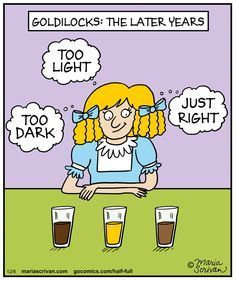 The Pub Curmudgeon has written a good post 'Never The Twain' on his blog comparing cask beer to craft, and pointing out that many handcrafted real ales could be justifiably called craft. While he's correct, it's an argument that's probably been lost because popular linguistic usage isn't always logical - for example, did you know that 'flammable' and 'inflammable' mean exactly the same thing?


I don't have a problem with the existence of craft beer, including keg, and wouldn't refuse to try it, if I knew anywhere I could buy it, but the nearest place I'm aware of is in Manchester, 40 miles away.

There were probably closer places that I didn't know about, but the point that craft wasn't generally available was correct at the time. However, such days are long gone and it is now commonplace. In the spirit of experimenting I have tried a few and, as I've previously written, have found that some have been well brewed and have a good flavour. The main difference concerns the method of dispense, and drinking craft is to me like drinking bottled beers, which is something I might do at home or at a party. In the pub I simply prefer real ale.

When writing about pubs for the weekly CAMRA column in our local papers, I'll always mention craft beers if they're on sale; I have been writing these for more than three years now and none of our local 800 members have ever complained about it, which tends to counter the 'stick-in-the-mud' accusations against the campaign. Indeed, some CAMRA festivals have even been putting on a craft bar.

I know some drinkers who happily drink both styles regularly, and I expect that tendency will increase as the original craft drinkers grow older and the subsequent generations of beer drinkers simply see handpumps, craft fonts and bottles as normal components of pub or bar scenery - not as defining their personal identity. If I'm right, then 'Never The Twain' will become history.

Today I don't detect the hostility between vociferous cask and craft advocates that I certainly used to see on some blogs and websites, in the risible antics of BrewDog, and in the letters page of 'What's Brewing', the CAMRA newspaper - but, oddly enough, didn't tend to encounter in the real world.
Posted by Neville Grundy at 4:41 pm 2 comments:

In May Southport and West Lancs CAMRA is running the Southport Mild Trail. Eight local pubs have agreed to offer customers a cask conditioned mild option for the whole month of May. The participating pubs are:
Join the Mild Trail either by using the card printed in the local CAMRA magazine 'Ale and Hearty' or by picking up a Mild Trail card (as shown above) at any of the eight pubs, ordering cask mild at each participating pub and asking them to stamp the card. Completed cards will be included in a draw with a chance to win one of the prizes listed on the local CAMRA website.
Posted by Neville Grundy at 5:08 pm 2 comments: