Are COVID-19 passports the answer for pubs? 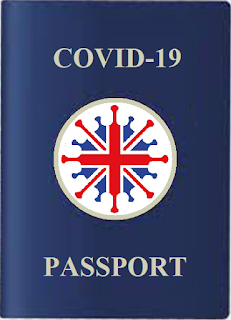 As we approach the reopening of pubs on 12 April for outside service, a late complication has been thrown into the mix with the suggestion that pubs and bars may choose to operate a COVID-19 passport policy so that customers could show that they'd had either a vaccination or a negative test. As the possibility of COVID passports has been discussed for months, I don't see why the government is raising the matter only now - so soon before reopening.

Pubs need more notice to help them plan staffing levels and how much drink to order, especially after a year of lockdowns. The British Beer and Pub Association (BBPA) has calculated that up to 87 million pints of beer - equivalent to £331m in sales - will have been thrown away in the UK as a result of COVID lockdowns.If pubs operate a passport policy, whether voluntary or mandatory, they would have to pay for a bouncer on the door to check passports before admitting people. Many pubs, smaller ones in particular, would struggle to pay for the extra staff member, especially after a year of lengthy closures interspersed with restricted trading due to COVID regulations.

The BBPA has expressed concern that passports will lead to confrontations between disappointed customers and staff. While this is distinctly possible, my view is that such incidents will be more likely if passports are voluntary because licensees will not be able to argue that they are simply enforcing the law.

Kate Nicholls, chief executive of UKHospitality, said: "It is crucial that visiting the pub and other parts of hospitality should not be subject to mandatory vaccination certification. It is simply unworkable, would cause conflict between staff and customers.”

Both organisations have pointed to the millions spent by the sector on ensuring a safe environment for customers and staff, and to the fact that, when pubs could open, no surges in infections have been linked to them.

CAMRA is opposed to vaccine passports because pubs have suffered badly over the last twelve months and could do without unnecessary restrictions. Furthermore, passports could prevent younger drinkers going to pubs while they wait for the vaccine rollout to reach their age group.

► This is word-for-word the article that I wrote for the CAMRA column in two local papers, the Southport Visiter and the Ormskirk Advertiser. The following is my own opinion which did not appear in the papers.

In relation to the idea of CV19 passports, I am frequently hearing claims, including from one member of my own CAMRA branch, that insisting on them before entry to pubs would be a form of discrimination. This use of the term 'discrimination' usually refers to prejudice in thought or action against people for irrational reasons such as skin colour, nationality, gender, sexual orientation, disability, religion, and so on. A suggestion of discrimination is potentially a serious accusation which needs to be examined.

I am a committed equality and diversity person and in my last job, there was a time when I was simultaneously an equal opportunities trainer for my employer and an equality and diversity spokesperson for my trade union. I cannot see how any licensed premises that did refuse admission because the customer didn't have a passport would be guilty of any breach of discrimination laws, no more than if admission was refused on, say, dress code grounds. If introduced now it would, for example, certainly prevent younger drinkers from being able to enter pubs, but not because of irrational prejudice, but as a health & safety measure to try to combat a pandemic that has so far killed 2,840,000 people worldwide. Measures to combat disease are not irrational, so to insist upon them cannot be described as discrimination, even they do disadvantage certain sectors of the population.

That is my view on the principle, but there are a number of practicalities that would have to be addressed before a passport scheme could be implemented:

• The potential for confrontation when people are refused admission must not be underestimated.

• Confrontations would be more likely if the scheme were voluntary because licensees could not argue that a passport was required by law.
• Some pubs would struggle to meet the cost of an extra member of staff on the door to check passports before letting people in.
• Timing: when would be the best time to implement a passport scheme to ensure that as few people as possible were disadvantaged?
• How do we deal with those who cannot have the vaccine for genuine medical reasons? (In my view, this doesn't include a dislike of needles)
• Any new CV19 variants against which existing vaccines were inadequate would instantly make the passport scheme pointless.

• We would need adequate measures to prevent forged passports.

• Far from encouraging confidence in pub-going, the scheme may well deter some drinkers from returning to the pub.

I've not heard of any surges in infections that have been linked to pubs and bars. Indeed, every one I visited during the gaps in lockdowns was very conscientious in administering and enforcing the official guidance, so we have to question whether the cost, effort and practical difficulties involved in such a scheme would be worthwhile. Although I don't have a problem with the principle of CV19 passports, I consider that the difficulties I've referred to and the potential consequences render the idea a non-starter.

Posted by Neville Grundy at 2:27 am 7 comments: