Locked down beer in pub cellars

The order to close pubs, like many other businesses, was not unexpected, but the actual date came at very short notice. As a consequence, pub licensees had little chance to run down their stocks by reducing the size of their orders in the run-up to closure, meaning that the cellars of many pubs and bars have large quantities of unused beer, cider and perry. It is estimated that if they stay closed into the summer, 50 million pints will have to be discarded.

"It's a very sad waste of all the work and talent that goes into producing great beer," says Tom Stainer, CAMRA's chief executive. "People won't get to drink it and all those resources have been used up for nothing."

The shelf life of beers, ciders and perries depends on how it's produced, stored and served. Keg products, which include most beer sold in British pubs such as lagers, smoothflow beers (including a famous Irish stout) and ciders on fonts, can last for several months. Real ales and ciders, on the other hand, will only last for weeks, with any that have been already opened going off after a few days. All real ales, ciders and perries that had been opened at lockdown will probably have already been disposed of.

One suggestion is converting out-of-date beer into hand sanitiser by extracting the alcohol, which independent brewer Brewdog is already doing, but this is ultimately a very limited solution.

According to the BBC, supermarket alcohol sales increased by more than a fifth last month after pubs, cafes and restaurants closed. 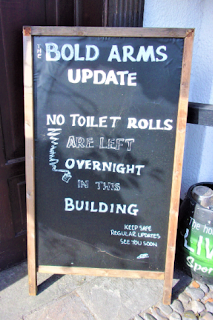 "People are missing these things in their lives," says Tom Stainer. "It's not the biggest issue that the country is dealing with, but aspects of life like going to the cinema or café, or going for a pint, are something we treasure."

Many breweries and distributors have offered to take back barrels at no charge once the lockdown is over, taking some of the financial pressure off licensees. However, more can be done, as Tom Stainer, explains:

“The Government needs to recognise the impact of an extended lockdown on [hospitality] businesses and confirm that the support package in place is extended until all restrictions are lifted. It must also consider a support package for pubs, breweries and cideries after they reopen, in recognition that it will take many months for businesses to recover fully.”

► This is one of a series of articles that I write for the CAMRA column in our local papers, the Southport Visiter and Ormskirk Advertiser.
Posted by Neville Grundy at 5:06 am 2 comments:

Bill Tidy has announced in the latest edition of the CAMRA newspaper What's Brewing the sad demise of the legendary real ale campaigner, Keg Buster. This news is not very surprising, seeing that Bill himself is 84 and in poor health. Over the years he has created several wonderful long-running cartoon strips in addition to Keg Buster, such as The Cloggies and The Fosdyke Saga.

In the 1980s, Bill Tidy was a neighbour of ours in Westbourne Road, Southport. He was a regular at the Berkeley Arms, a hotel bar well-known for a fine choice of real ales and home-made pizzas; my friends and I spent a lot of time there. I occasionally saw Bill with his friends in the bar, although I never had the opportunity to speak to him. Bill drew a cartoon about the Berkeley which was framed and proudly displayed on the wall. I can't recall after all this time what the joke was, and this was in the days before we all had a mobile phone camera in our pockets. Unfortunately the Berkeley closed well over a decade ago when the building was converted to flats; I have occasionally wondered what happened to the cartoon.

By affectionately mocking us real ale campaigners, Keg Buster was a welcome corrective to the tendency to solemn self-importance and pomposity that some committed advocates for any cause can occasionally be prone to. I don't know whether there are any plans to replace Keg Buster, but if there are, the cartoonist concerned has a hard act to follow.

RIP Keg Buster, and best wishes to Bill on his retirement.

Posted by Neville Grundy at 8:19 am 4 comments: