The Four Ashes is a micropub in Waterloo which opened just three years ago. It is on a street corner, close to the Plaza Cinema, and has just one room with the bar on the far side as you enter. The surroundings are comfortable and the atmosphere relaxed. Rob Ashe welcomed me, remembering me from a previous visit, even though I had been there only twice before. It is run by four members of the same family, hence the name.

To encourage conversation, it has no music or large-screen sports - there is also no Wi-Fi, presumably for a similar reason - and this all works: I found myself chatting to several regulars at the bar. Board games are provided and there is a monthly quiz, the next being on Thursday 19th March. 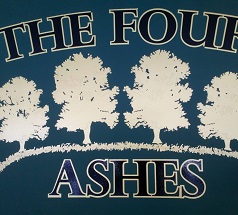 Children and dogs are welcomed, and the pub has featured in the local paper for having raised nearly £7000 for CHICS, a local children's cancer support charity based at Alder Hey, a great reflection of the generosity of its customers.

It is one of five finalists in the CAMRA Liverpool & Districts 2020 Pub of the Year competition, the only pub outside of the city centre and the only micropub, which is a remarkable achievement.

The Four Ashes is a fine addition to what is already a good real ale scene in Waterloo, an area blessed with quite a few pubs and bars all within a short walk of each other. It is at 23 Crosby Road North, Waterloo, on several major bus routes and close to Waterloo railway station. It is closed on Monday, and you can check its other opening hours on its Facebook page.

► This is one of a series of articles that I write for the CAMRA column in our local papers, the Southport Visiter and Ormskirk Advertiser. Older articles on local pubs are here.
Posted by Neville Grundy at 8:44 pm 1 comment:

The Philharmonic: a Grade I Listed Pub

I paid a visit to the Philharmonic Dining Rooms, Liverpool, last week. This pub has just been upgraded to Grade I listing, making it the first purpose-built, Victorian public house to receive such a listing, the highest level for a historic building. It now joins the top 2.5% of protected historic buildings in England, such as Buckingham Palace, Chatsworth House and Liverpool’s Anglican Cathedral.

Sometimes referred to as a 'cathedral among pubs’, the Philharmonic is one of the most spectacular pubs from the late 19th century, considered the golden age of pub building. Duncan Wilson, Chief Executive of Historic England, said: “English pubs are some of our best-loved community buildings and are often threatened with closure ... We are proud that the Liverpool Philharmonic pub, a remarkable survival from the Victorian era, has been given a Grade I listing which will help maintain and preserve its outstanding interior fittings and exterior fabric for the future.”

The pub has several separate rooms: the main bar, a public bar, two side rooms (named with Scouse wit as Brahms and Liszt), and a rear dining room. The gents are famously made of Victorian marble, and I expect this is the only pub in the country where women regularly visit the gents. Indeed, I was chatting to two couples from Gloucestershire who were in Liverpool on holiday, and the two women insisted on visiting them. They were also taking photos of the stained glass windows, the elaborately carved woodwork, the detailed ceilings and the mosaic floor and bar front. Everywhere you look is something interesting.

The menu is quite extensive and includes starters, a pie menu, choice of main dishes, salads, burgers, sandwiches and desserts.

When John Lennon was asked about the downside of fame, he replied that it was not being able to go to the Phil for a pint. This magnificent pub is on Hope Street, close to the famous Philharmonic Hall, and is an easy train ride from the Southport and West Lancs areas.

► This is one of a series of articles that I write for the CAMRA column in our local papers, the Southport Visiter and Ormskirk Advertiser. Older articles on local pubs are here.
Posted by Neville Grundy at 5:24 pm 2 comments: