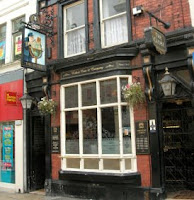 I was in Liverpool yesterday, having been called out of retirement to apply my experience to a union personal case, and afterwards my companion and I decided to go for a drink in the Globe in Cases Street, which is right opposite Central Station in Liverpool. This small pub with its famous sloping floor is a genuine local in the heart of the city centre, and always has between 3 and 5 real ales on. The bar staff is excellent, keeping an eye on who's been waiting, so even if it's busy, you are unlikely to be kept long. The tiny back room has a plaque commemorating the founding of the Liverpool Branch of CAMRA there in the 1970s. The pub tends to have music playing, usually from the 50s and 60s, and on busy nights you can sometimes end up with a community singalong. As I say, it's a real local, the people are always friendly, and a good place to go when waiting for a train, although I've occasionally missed the following two or three as well.

The beer I tried was Lancaster Amber Ale, which I hadn't had before. I enjoyed it so much that I had a couple more, which is unusual for me with a 3.7% ale. The brewery website says: "Punching above its weight in flavour, Amber, at 3.7% abv, is a low strength bitter that is dark gold in colour and complements its flavour profile with an abundantly hoppy bouquet allowing the drinker to relish subtle floral and citrus aromas." Allowing for brewery hyperbole, this isn't too far from the mark. And I managed to miss the next train.
Posted by Neville Grundy at 2:12 pm