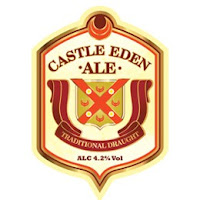 I went into the Guest House in Southport last night and saw on the bar the familiar pump clip for Castle Eden Ale. I haven't seen this around for years, and it got me thinking about the beer and the brewery.

The Castle Eden brewery in County Durham was unusual in that it survived decades of ownership by Whitbread without being closed. As well as producing its own beers, it was the final home of Higsons of Liverpool. Whitbread had closed the Higsons Brewery, moved production to the Hillsborough brewery in Sheffield, and then again to Castle Eden, by which time the beer bore no resemblance to the original. The Higsons closure was just one example of Whitbread's notorious predilection to close breweries; T-shirts were made showing the Whitbread Tour of Destruction, listing all the breweries they had closed over the years. Castle Eden regained its independence in the late 1990s, took over Camerons of Hartlepool in 2002 and closed down their own brewery, thus speedily achieving on their own what Whitbread had failed to do in decades. The new company, operating under the name Camerons, continued to brew the beer under licence from the brand owners AB Inbev, who decided to pull the plug on it in 2009.

A company called Limelight Brands Ltd has acquired the Castle Eden brand, and Camerons are brewing it again as a guest ale available from March to May this year. The Camerons website describes it as "a light, creamy golden ale with a late addition of Styrian Goldings hops giving it an interesting contrast between an initial sweet surge of flavour followed by a slightly bitter aftertaste." Perhaps, but to me it just tasted okay. Nothing exciting, but that's how I always remembered it anyway; in fact, that's how I remember all the beers from the Whitbread stable, including Flowers and Trophy. Fellow drinkers used to praise Flowers and Castle Eden, but I never thought they were more than adequate. I was used to drinking Higsons, Bass and Walkers on Merseyside.

It's worth a try, if only for old times' sake, but like a lot of revived beers, I think it will struggle against many of the excellent beers produced by microbreweries nowadays.
Posted by Neville Grundy at 4:29 pm