I was quite shocked to learn that the Lion Tavern and the Cross Keys in Liverpool have been closed as a result of a dispute with Punch Taverns over the rent, according to the Liverpool Echo. Both are run by Sean Porter and Michael Black. The Echo's report of the dispute is here.

The Lion particularly is architecturally interesting with old tiles, wood panels, mosaic floors, a glass-domed ceiling in one room and etched windows; it is listed in CAMRA's National Inventory.

Sean used to work in the Mason's in Southport and asked me six years ago to start an informal song session in the Lion like the one in the Mason's that I usually attended. They have had to cancel their advert in Ale & Hearty, the Southport & West Lancs CAMRA magazine, after I'd just spent some time redesigning it - not that that is the main issue here. At the time of writing it's uncertain whether the pub will reopen with Sean and Michael, or with someone else in charge.

From a personal point of view, I am concerned about the future of my monthly music session, but more importantly, I hope that Sean and Michael are able to resolve their differences with Punch and stay on. The Lion has always struck me as well-run with eight real ales and a couple of real ciders since before I began my singarounds in 2010; the beers have always been in good condition, with some interesting changing guests.


This is the revised advert. I hope it can be used at some point! 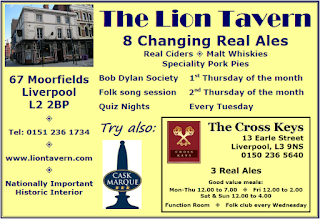 Posted by Neville Grundy at 9:24 am