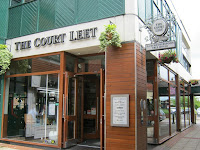 A short stroll through an arcade called Wheatsheaf Walk, just off Burscough Street in Ormskirk, will bring you to a pub called the Court Leet. The name is taken from the original Court Leet which used to run Ormskirk's municipal affairs from a building on this site until its abolition in 1876. Sometimes the town officials would adjourn after their business was concluded to a long-gone pub called the Old Wheatsheaf, after which Wheatsheaf Walk is named.

This JD Wetherspoons pub was opened in 2014 and is much more modern than the customary house style of the pub group with large windows and a bright and airy interior. The pub is on two levels with an open air balcony on the first floor overlooking the Ormskirk skyline; a lift is available.

As is usual with Wetherspoons pubs, food is available all day and late into the evening. There is a quiz night every Monday; Curry Club is on Thursdays; and Friday is fish night. The pub is child friendly with a children's menu and baby-changing facilities. Access is good with no steps, and there is free WiFi. It opens at 8.00 am and closes at midnight (1.00 am Thursday to Saturday). Address: 4 Wheatsheaf Walk, Ormskirk, L39 2XA. Tel: 01695 579803. The bus and railway stations are both less than a quarter of a mile away.


This is part of a series of articles that I am writing for the CAMRA column in our local paper, the Southport Visiter. Previous reviews are here.
Posted by Neville Grundy at 10:53 am