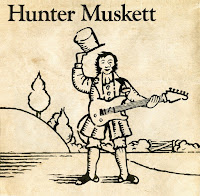 A word or two about the guests at the Bothy Folk Club this Sunday 30 October - Hunter Muskett. Way back in the early 70s I had two favourite folk-rock bands which never really hit big. The JSD Band who supported David Bowie in the Ziggy era was one, and Hunter Muskett was the other. I guess that Steeleye and Fairport had the scene sown up but these lesser-known bands were certainly not musical inferiors.

Hunters made two LPs, both of which are now expensive collectors’ items and we’ll be hearing classic songs such as 'Silver Coin' and 'Magician' on Sunday. The band broke up in 1974 but still with the original line-up, got back to the road in 2010.

This is a rare chance to catch a slice of legendary and innovative UK music which not only stands the test of time but retains an on-going force to reckon with.

Do come along: we’ve had a season of ups and downs this far, and I’d love this gig to be a turning point. Band website here. Doors open at 8.00 pm at the Park Golf Club, Park Road West, Southport, PR9 0JS.
Posted by Neville Grundy at 6:24 pm

Email ThisBlogThis!Share to TwitterShare to FacebookShare to Pinterest
Labels: Bothy, What's on