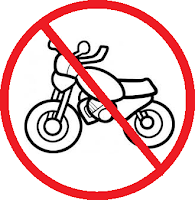 The increasingly eccentric Sam Smiths brewery has been accused of banning bikers. One biker recently rolled up at The Royal Oak at Ulley, near Rotherham, and was told he could no longer be served because of an instruction from the brewery. The owner of the brewery, Humphrey Smith, told a woman biker who had been using the pub for many years that "local people have no wish to have them in this establishment" and he did not want "undesirables" in the pub. This particular diktat follows the brewery's announcement in April that swearing is banned in all its pubs.

Unlike the swearing ban or the ban on music that arose from a fit of pique about 'New' Labour's absurd pub music licences (mentioned in a post here in 2009), this particular ban seems confined to one pub. The bikers' magazine, MCN, is distinctly unimpressed, stating that Sam Smiths' pubs "all feature a Victorian theme and don’t have televisions or play music ... It would seem that Mr Smith’s attitude towards bikers is as Victorian as the theme that runs throughout his pubs."

Having drunk in pubs favoured by bikers, I have found that there is no more trouble than in any other pubs, and in fact rather less than some. Is this discrimination? Certainly, because a whole group of people has been banned, regardless of how the individuals in that group have behaved - imagine the reaction if the members of any ethnic or religious group had been described as "undesirables". However, as bikers are not a "protected group" under the Equality Act, there is no recourse in law.

The brewery has ignored requests for comments from several journals and newspapers. I wonder what Humphrey will find to ban next?
Posted by Neville Grundy at 3:43 pm