The Dormouse in the Room

I think the survey summarised below refutes that argument quite conclusively. Smoking has been banished from our pubs permanently, and a good thing too. I put up with smoky atmospheres in pubs for more than 35 years, and I think it's quite probable that other people's smoke has exacerbated my sinus problems, which over the years became significantly worse than when I started going to the pub in the early 1970s.

I find it quite extraordinary that a minority of smokers abandoned their social lives in order to avoid the arduous journey of a few seconds' walk to outside the door in order to have a fag. Was the right to smoke inside a pub more important than meeting their friends? If so, they were not particularly loyal friends.

Bearing in mind that no one under 30 has ever had a drink in a smoke-filled pub or bar, and they are the drinkers of the future, I'd say that this is a lost cause for those who are so committed to their addiction that they believe it's okay to pollute the lungs of non-smoking beer lovers.

I'm pleased to say that, although I know quite a few smokers, none of them is that selfish. 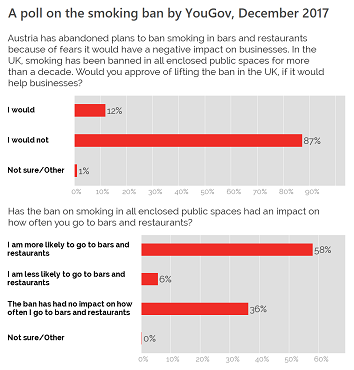 Posted by Neville Grundy at 2:25 am