What's a reasonable price for a pint? 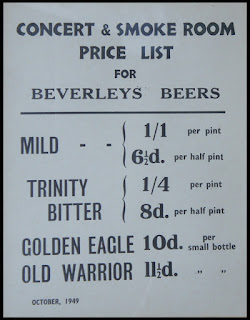 This is from an article I wrote for the CAMRA column of the local papers. Text in italics was left out of the article as printed for space reasons.

The internet market research company YouGov asked more than 40,000 people what they thought would be a reasonable price for a pint in the pub and compared the responses to the actual prices. Unsurprisingly, the responses across the country vary as much as pub prices do. Nationally, the average price that we think is reasonable is £3.00, 60p less than the actual average price.

The price of bitter in 1972 was around 13p to 14p, at least in this part of the country. This is equivalent to £1.75 to £1.88 today, using an inflation calculator. Obviously, beer costs considerably more than that today, even in places like Wetherspoons, so the price we pay now for a pint cannot be attributed to inflation alone. A major additional factor was the massive sell-off of pub tied estates after the Beer Orders of 1989.

When the big breweries sold off most of their huge pub estates, pub companies (pubcos) moved in to hoover them up. They paid for the pubs by mortgaging them to the hilt. The immense debts they acquired in this way were made much worse by the financial crash of 2008. The pubcos survived, being too big to fail – if they went under, so would the mortgage providers.

To service their debts, pubcos told their pubs that they had to get most, if not all, their supplies through them, imposing huge mark-ups along the way. Several local licensees have told me in confidence that the mark-up on a cask of beer can be between 33% to 50% above the price on the open market. Licensees who look elsewhere for supplies risk losing their livelihood, so the cost has to be passed on to the customer.

A few pubcos such as Wetherspoons have a much more sensible business model, not saddled with gigantic debts, which is why their prices can be lower. Also, independent pubs and bars can also charge less for similar reasons, but regrettably most of our traditional pubs are now owned by pubcos.

This is adapted from one of a series of articles that I write for the CAMRA column in our local papers, the Southport Visiter and Ormskirk Advertiser. Some previous articles are here.
Posted by Neville Grundy at 6:01 pm