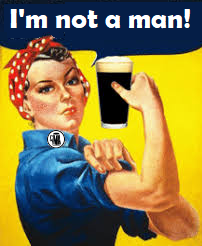 I welcome CAMRA's involvement in the Women In Beer festival. However, shouldn't we put our own house in order? Isn't it time to ditch old-fashioned, gender-specific terms such as 'chairman', and use gender-neutral terms such as chair, chairperson or even president?

• Reply:
Thank you for getting in touch. We have suggested the terms get reviewed, but it is down to the individual who holds that seat to decide what they'd like to be called - when Jackie Parker was Chairman, her preference was to be called Chairman rather than Chair!

I will forward on again the feedback though, as we have had leadership changes in the last year who may feel differently.

• My response:
I don't see it as a matter for personal choice because the terms must be prescribed in some kind of constitution, which probably needs amending. It is possible that Jackie Parker used 'chairman' because that was the official term.

Nowadays gender-specific terms such as 'chairman' make CAMRA look like an old-fashioned boys' club, rather than the inclusive campaign it would claim to be. Terms such as 'firefighters', 'seafarers', 'police officers' and 'actors' (for both genders) are increasingly becoming the norm.

The usual response from those who oppose gender-neutral terminology is something along the lines of "The position is not a piece of furniture". That is immature nonsense: the queen is often referred to as 'the crown' (e.g. the Crown Prosecution Service), but she is not a piece of jewellery, 'black rod' refers to a parliamentary officer, not a stick, and 'the bench' refers to three magistrates, not a long seat. My trade union has had gender-neutral terms since at least the 1970s, long before I joined, and - amazingly - the sky hasn't fallen in.

As the branch press officer, I write a weekly CAMRA column in two local papers. If I use a national CAMRA press release, I always replace 'chairman' with 'chair'. No one in the branch has complained.

This really shouldn't be an issue in the 21st century. However, I appreciate the fact that you will pass on my feedback: would you include this e-mail as well? Thanks.
Posted by Neville Grundy at 2:43 pm