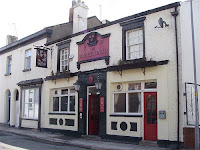 Less than a quarter of a mile from Waterloo Station (on the Southport to Liverpool line), there is a first-class pub that is embedded in a row of houses that all open straight onto the street, close to Crosby Marina. It is a small pub with a comfortable wood-panelled lounge and a rather more spartan bar. In the lounge, there is still waitress service to your table, and on the walls pictures of old Liverpool, in particular of the old overhead railway that used to serve the docks. There are no fruit machines, pool tables, juke box or food ~ it's just a good honest, old-fashioned local that does not look to me as though it has ever been altered, although it is not the scruffy drinking den that word 'unaltered' can sometimes describe ~ quite the contrary, in fact. As a result, it is often busy with a friendly crowd of regulars chatting and having a good time, with helpful bar staff.

The pub was originally a Higson's house and is rather like a small version of the Crow's Nest in neighbouring Crosby, also a former Higson's house. When I visited the guest real ale was Bateman's XXXB, which was in such excellent condition I didn't try any other beer (which is usually from the Cain's range).

If you fancy trying this untouched reminder of a former age, turn left out of Waterloo Station then right at the Marine pub into East Street. You'll find the Volly on the left. (postcode L22 8QR)
Posted by Neville Grundy at 4:09 pm