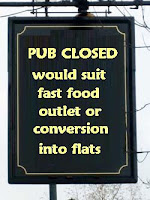 We were talking about pubs in the Guest House last night, in particular local pubs we have lost.  The discussion was prompted by the closure of the Blue Bell in Barton near Ormskirk, that I wrote about a few days ago.  Southport has lost several pubs within recent years:
The Herald on Portland Street.  This hadn't been a real ale pub for many years, although 20 years ago it used to serve John Smith's Bitter and Magnet on handpump.  In latter years it became a local live music venue, and I've played there 2 or 3 times myself.  At the moment it's fenced in with a skip in front, and the inside is being ripped out for conversion, to flats in all likelihood, but it certainly won't be a pub again.
Nigel's Bar (in the Shelbourne Hotel), Lord Street West.  Always a good pint of Timothy Taylor's Landlord, and also the first place I drank George Wright beers.  This hotel was the venue of the Bothy Folk Club for three years until the hotel was closed for conversion into flats.

The Two Brewers, Kingsway, (previously the Tudor) was a training pub for Tetley Walker and was unique in that it sold both Tetley's and Walker's beers, hence the name.  When the licensee of the Old Ship in Southport, a Walker's house at the time, was given a CAMRA award, he told me was pleased but slightly embarrassed, because surely the training pub - Tetley Walker's flagship pub in the town - should in theory always win any awards going.  Once I entered and the barman shouted across the room, "No jeans allowed", whereupon I told him a sign outside the door rather than a humiliating shout across the pub might be better customer service.  If that's how they were trained, no wonder it didn't survive.  It has been demolished and replaced by a completely different business.

The Berkeley, Queens Road.  Famous for a good range of real ales, including Pendle Witches Brew, its great range of pizzas and at one time a resident Vietnamese pot-bellied pig.  Our band once played a charity gig there.  It was closed for redevelopment into flats at around the same time as the Shelbourne, and it was owned by the same family.  The name was variously pronounced as 'berkly' and 'barkly'.

Two pubs have been demolished and rebuilt:

The Blowick on Norwood Road was an old Tetley house which was demolished and rebuilt a few yards to the right of the original site and reopened with a thatched roof as the Thatch and Thistle.  Last year it became the Carvery Grill and this year the Thatched Pub and Grill.  The name changes show that it's going for the food market and on my last visit, the real ale had declined to Greene King IPA only.  The Richmond was also an old Tetley house that was demolished and a new pub using the same name built on the same site.  It's known for food and sells beers from Holts of Manchester.  Although both these pubs have been replaced, the originals both had character and features of their own that haven't been replicated in the replacement buildings.


Before the smoking ban obsessives trot out their simplistic comments, I know for certain that some of these closures have nothing to do with the smoking ban.  My assessment of the reasons for pub closures can be found here.
Posted by Neville Grundy at 6:43 pm