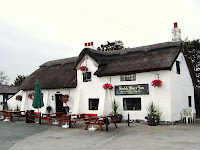 The region's most peripatetic singaround that began life many years ago in the Ship Inn in Haskayne has found another new home: the historic Scotch Piper in Lydiate. Following from its leaving of the Ship, it has spent time at the Running Horses and Weld Blundell, both also in Lydiate. Apparently the latest move has something to do with a clash between the requirements of a singaround and those of big screen TVs.

The Scotch Piper boasts that it is the oldest pub in Lancashire and displays the year AD 1320 on its sign. It has whitewashed walls and a thatched roof and is undoubtedly ancient. According to local legend, the pub was named because in 1745, Bonnie Prince Charlie's retreating Jacobite army left wounded piper in the care of the pub. When he recovered from his injuries, he stayed and married the landlord's daughter. The pub has a tiny bar and snug to the left as you go in and two rooms to the right; the singaround is in the farthest. Unlike the previous pub that the singaround met at, it does serve real ale, which was in good nick when I was last there a few weeks ago. Like all singarounds, there is no admission charge and you can either perform or just listen, as you prefer.

The pub is worth a visit at any time and is very close to the Leeds-Liverpool canal. It is on Southport Road (the A5147), Lydiate, L31 4HD. This is a good pub; I hope the singaround can find a permanent home here.
Posted by Neville Grundy at 9:24 pm