Molson Coors - not the cuddly capitalists after all 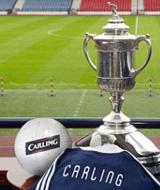 Molson Coors has pleasantly surprised many real ale drinkers by taking over and investing in - rather than shutting down - the Cornish brewery, Sharp's; I wrote about it in January. A news story I read recently in Private Eye suggests to me that we'd be unwise to set aside all our suspicions of this multinational corporation.

Alton Town FC is a local football team that plays plays in the regional Wessex League; it has been told it is to be evicted at the end of this season from a sports ground owned by Molson Coors. Football has been played on this land since the 1920s when it was used by the staff teams from the Courage and Bass breweries. In 1935 a covenant between Courage and the council was intended to protect the land for sport and recreation in perpetuity. Molson Coors is using its vast resources to find ways of getting around this obstacle in order to build houses on the site.

Carling, a Molson Coors brand, is sponsor of the current Scottish national side and was until recently sponsor of the English League Cup. So while Molson Coors, the world's seventh biggest brewer by volume, gain plaudits and publicity for supporting football nationally, they are happy to evict a grass roots team just to squeeze the last ounce of profit from a tiny asset, irrespective of the consequences for the local community. They obviously believe, probably correctly, that such disgraceful behaviour won't garner much interest nationally. Finding a new football pitch will be extremely difficult; if it proves impossible, that will be the end the end of Alton Town FC. No one can argue that this plan is essential for the future profitability of the Molson Coors, so there can no other motive than greed, which neatly puts this quote in perspective: "Carling, the UK's best-selling lager, continues to be a leading sponsor of sport in Scotland and the UK."

What's this got to do with Sharp's Brewery? Quite a lot. Molson Coors are nurturing Sharp's as they want to gain credibility among real ale drinkers, and they have succeeded in that to quite an extent. We must however be under no illusions: if Molson Coors decide that the costly business of maintaining a small brewery in Cornwall, not exactly handy for transport routes, no longer fits in with their strategy or "vision", the brewery will go, production will be centralised, Doom Bar et al will simply become brands devoid of any resemblance to the original beers, and the brewery site sold for profitable redevelopment.

I'd like to be wrong, but the treatment of Alton Town FC proves that this huge capitalist corporation hasn't changed its spots. Irrespective of how profitable Sharp's is in future, they'll maintain it just as long as it suits them, and not a day longer.
Posted by Neville Grundy at 7:34 pm