Take it to the limit 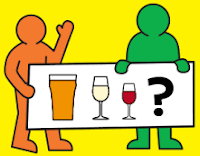 The question of alcohol units has been raised again, this time by CAMRA who have pointed out that in a YouGov poll that surveyed 2040 people, 61% agreed that alcohol can be part of a healthy lifestyle, and 51% disagreed that the recommended units should be the same for men and for women. In another poll of doctors earlier this year, two thirds disagreed with the Chief Medical Officer for England's (CMOE's) assertion that there is no safe level of alcohol consumption.

Colin Valentine, CAMRA's national chair, made a point that has been made on this blog previously: if the current units lack credibility, as the YouGov poll suggests, or if there is insufficient plausible scientific evidence to support them, people will simply ignore them. That should be rather obvious, even to the CMOE.

A couple of years ago, the Independent reported that a former World Health Organisation alcohol expert Dr Kari Poikolainen had analysed decades of research into the effects of alcohol on the human body, concluding that drinking is only harmful when you consume more than 13 units a day - four to five pints of beer or more than a bottle of wine. He added that drinking more than the CMOE-approved recommended daily intake may in fact be healthier than being a teetotaller, but that heavy drinking could be worse than abstaining.

The CMOE's position is illogical anyway. On the one hand, she says that 14 units is the recommended safe limit, but she then claims that here is no safe limit at all. It has to be one or the other, not both. Such mixed messages will only reduce her credibility even further.
Posted by Neville Grundy at 4:54 pm