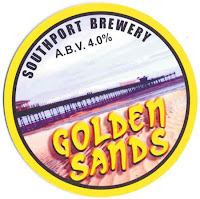 I have just heard that Southport Brewery's Golden Sands has won the Gold in the Best Bitter category at CAMRA's Great British Beer Festival in Earls Court, London, the biggest beer festival in Britain.

This is a fine accolade for a beer that I have loved since I first tasted it. Congratulations to Paul Bardsley for this tremendous achievement. Southport beers just seem to go down well wherever they're sold: for example, Golden Sands was the first to sell out at the Wigan Beer Festival, as I reported in March this year. No holidays for Paul and Elaine for the next few months, I suspect...