The Price Of Booze 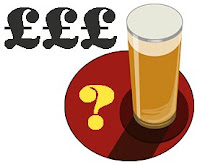 Earlier this year, the Scottish government proposed a minimum price for alcohol, and Sir Liam Donaldson, the Chief Medical Officer for England, has called for a 50p per unit minimum price for England. Some beer campaigners have seized on this proposal as a way of redressing the imbalance between pub and off trade prices and thereby helping pubs. At first glance, it seems an attractive idea, as a minimum price of 50p per unit will not affect pub prices at all, but will narrow the gap between pub and supermarket prices. I consider it a mistake for pub-goers to support this suggestion.

Firstly, do we want the government to dictate to businesses how much to charge for their products and services? If so, we would be taking the first steps away from a market economy to a central command economy. This would perhaps be welcomed by some on the left, but that doesn't include a socialist like me, especially as the politicians who would implement such a measure have shown a singular inability to run a capitalist economy, so I'd rather not let them loose on a command one. A true socialist economy would be structured to include as many people as people, and not, as with price rationing, exclude everyone except the well-off. Besides, the historical record of command economies so far does not inspire me with confidence. If, unlike me, you are a supporter of the free market economy, you cannot logically support government price controls.

Secondly, it would be the thin edge of the wedge. Once a minimum price has been established, there would be nothing to stop politicians increasing the price until it does begin to impact upon pubs, all in the name of health and public order, of course. In fact, I'd be astonished if that didn't happen. Minimum pricing is a two-edged sword.


Thirdly, a minimum price will impact on people who can't afford pubs or whose circumstances restrict them going out. A single parent interviewed on Radio 4 news said that she'd love to be able to meet her friends in the pub, but she couldn't, partly because of the prices, but also partly because she had to look after her children. Instead, she sometimes had a couple of drinks at home, but felt that minimum pricing would deny her even that small pleasure. Are we entitled to do that?


The problem with pub prices is caused by a mixture of factors: the tax escalator, greedy Pub Cos and supermarket prices. I consider the first two are the biggest causes of the problem, and that increasing supermarket sales are the consequence. Everyone knows and expects that eating and drinking out will be dearer than at home, but the we're now in the position that the differential is becoming too great for many people to afford. That's why pubs are struggling and closing. Making off sales more expensive will not make pubs cheaper: if you can't afford to go to the pub when there's no minimum price, you won't be able to if there is one.


Supporters of real ale and pubs should steer clear of minimum pricing for alcohol: there's too little to be gained and too much to risk losing.
Posted by Neville Grundy at 3:31 pm