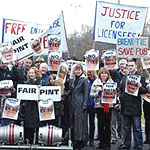 The GMB trade union will expose the links between inflated rents levied by pubcos and business schemes that transfer money to offshore accounts to avoid paying UK tax. The union has recently been running a campaign against a number of pubcos and brewers in recent weeks on behalf of pub licensees, and has recently blamed a 25% drop in alcohol sales in pubs on "artificially high prices that tied pub tenants have to charge to recover the [alcohol prices] and rents charged by the pubcos who own the ... pub". They will table a resolution at the Labour Party's annual conference at the end of September in Manchester. Among other things, the resolution will call for action on tax avoidance schemes which apparently cost the UK economy £50,000 million a year.
We drinkers know that more than a third of what we pay for a pint goes straight to the government, but to realise that we are also unwitting partners in a scam to avoid tax by use of offshore tax havens is another matter altogether, and is especially galling when we are facing an increase of VAT to 20% in the New Year.

The GMB's resolution is not just about the pub industry - the full text is in this article in the Publican - but it deserves to be passed and should be taken seriously by the Labour Party. Well, we can dream ...
Posted by Neville Grundy at 2:06 pm