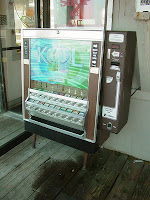 As from today, cigarette machines are banned in pubs in England, with the rest of the UK following suit next year.  The BBC News item with stats and arguments for and against is here.
I was in the Thatched Pub and Grill on Monday when a man came in from the vending machine company to tell the licensee that they would probably collect the machine by Saturday (i.e. today), but if they hadn't, to turn the machine around so it faced the wall.  I thought that odd - why not just switch it off? - until I learnt that licensees "must ensure all tobacco advertising on vending machines is removed.  Any person found guilty of displaying cigarette adverts on a vending machine could face imprisonment for up to six months, a fine of £5,000, or both."
Prison for displaying a cigarette advert?  That's worse than the smoking ban laws whereby a failure to display "no smoking" signs could result in a fine of up to £1000, or even the £2500 maximum fine for not preventing smoking on the premises, even though the actual smoker faces a maximum fine of only £200 (I've never thought it fair that the licensee faces heavier punishment than the smoker).  Such criminalising of licensees for these offences is grossly disproportionate.  As a regular pub goer, I don't recall ever seeing children buying cigarettes from pub vending machines, which is not to say it never happens, but I do wonder how far the stats and figures quoted are speculative?  The BBC news item states:  "It is ... estimated that 35 million cigarettes are sold illegally through vending machines to children every year."  (My emphasis)

Also, Trading Standards sending in under age volunteers and finding children can buy cigarettes this way isn't proof that children do in great numbers. Besides, isn't this a form of entrapment?

If the government wishes to ban cigarette machines as potentially being subject to such misuse, fair enough, but the penalties introduced are draconian and excessive*, seeing that cigarettes are not actually illegal.  I wonder whether any trade association is taking the matter further?

* Please note:  I am not referring to the existing penalties for selling tobacco to children, but to the new penalties for not closing the machines down and for not removing the adverts.
Posted by Neville Grundy at 1:11 pm