Called To The Bard 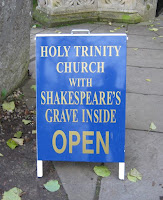 I spent three days in Stratford upon Avon last week. Drinking real ale wasn't the main purpose of the trip, especially as my companion never touches the stuff, but what else can you do in the evenings? The pubs we went into were certainly picturesque, such as the Garrick, the Old Thatch Tavern and the Pen and Parchment, but the range of beers seemed mostly to be derived from the Fullers and Greene King range. Only the Wetherspoons pub, the Golden Bee, had anything different. Having said that, a glance at the local CAMRA website reveals lots of real ale pubs we didn't have time to visit, so perhaps I was just unlucky. I don't have too much of a problem with beers from regional breweries, but after a while they all begin to taste much the same.

The Garrick is the oldest pub in Stratford, and it certainly looks it; outside it proudly proclaims "real ale served here since 1594". It had three real ales on: Speckled Hen, Greene King IPA and a house beer which I judged by the flavour was also brewed by Greene King. The best beers I had during my visit were bottled Purity Mad Goose in the RSC Theatre bar (we saw The Merry Wives Of Windsor) and a wheat beer from Bath brewery in Spoons.

If I go again to this beautiful part of England, I'll do some pub research in advance. The pub prices do seem to be at London levels, except of course for Spoons at £1.99 a pint, but I wouldn't let that put me off.

Posted by Neville Grundy at 3:47 pm