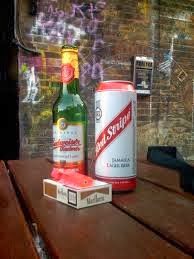 Disappointing news for that dwindling band who want to see the smoking ban relaxed. Market research company mruk polled a representative sample of 1,058 adults from across the UK asking them to imagine they were the Chancellor of the Exchequer and needed to help the NHS save money. The results were:
Rachel Cope, head of mruk research, commented “Whilst almost everyone recognises the impact of smoking on health, that’s not the case with moderate alcohol consumption. If there’s no perceived impact on health then people see minimum pricing as just another tax.” Personally, I consider £7.98* for a packet of 20 to be excessive, especially as £6.17 of that is tax. With cigarette smuggling on the increase, it's stupid to keep on putting up the tax if by doing so you get ordinary people accustomed to breaking the law.

While this survey was not specifically about the smoking ban, it suggests to me that liberalisation of the ban would not be popular, a view supported by a recent survey by YouGov of more than 1,000 Scottish adults which found that 78% would be in favour of extending the smoking ban to include play areas, such as parks and sports facilities, with only 11% against it. My own view, as I've stated before, is that I don't want changes to the ban either way; I find I'm not much affected by cigarette smoke in the open air. However, the precedent has been set in Wales with many areas banning smoking in play parks.

Perhaps the fact that 94% didn't support minimum pricing for alcohol, despite the relentless propaganda of the anti-alcohol brigade, is evidence that the common sense of the British people is greater than we might assume from media reporting. That alone must be a good thing.

* Figures from the Tobacco Manufacturers Association.
Posted by Neville Grundy at 3:36 pm