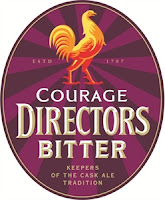 The Guest House in Southport quite often has Courage Directors on, and in recent years I've tended to ignore it as a debased relic of a beer I used to seek out. In the past, it wasn't a common sight in Merseyside, or Warrington where I was a student, but we knew the story of how it was brewed for the directors of the Courage company, and was put on general sale owing to public demand. If we came across it on trips down south, we'd leap upon it with enthusiasm.

The beer is now brewed by Charles Wells of Bedford, brewers of Bombardier and all the Youngs beers. In the last month or so, I've been giving it a try and I have to say that, far from being a brewing relic like, say, Tetleys or Boddingtons, it remains a perfectly acceptable pint in its own right, that stands up well among the newer beers that often surround it on the Guest House bar.

As usual, I looked at the brewer's own tasting notes: "Full bodied with a clean, bitter taste, balanced with a sweet burnt, malty and fruity notes with a distinctive dry-hop aroma and flavour." Actually, that's not too far from the mark at all. It's difficult to remember tastes accurately over a long period of time, and I cannot be certain how the original Directors used to taste, but from what I do recall, it is still recognisably the same beer. I'm wondering whether the Wells version has improved, as I remember not being so impressed in their early days of brewing it.

I'd now describe it as a good example of a classic British beer style; it's not innovative (how long can any beer remain innovative?) and probably not to the taste of those who dismiss 'brown beers' out of hand, but I find it an enjoyable pint nonetheless.
Posted by Neville Grundy at 4:00 pm