Whatever happened to 24 hour opening? 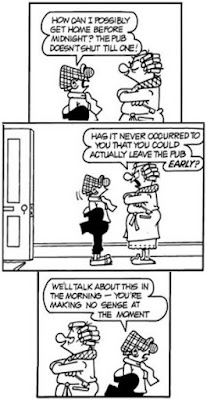 I found this interesting article by Camila Ruz on the BBC news magazine website about the impact of 24 hour opening hours. It was published on 24 November, 10 years to the day since the Licensing Act came fully into force. As the article states:

It was reported that the act would lead to round-the-clock drinking and there were warnings that extended hours would cause chaos. The Royal College of Physicians said it would increase alcohol consumption. Police chiefs complained that their forces would be stretched. One judge said that easy access to alcohol was breeding "urban savages".

The article goes on to show how the anticipated chaos never materialised. As most of us know, alcohol consumption is in decline, as is violent crime, including that attributed to drinking. Teetotalism is on the increase, including among young people.

So how did so many authoritative people get it so badly wrong? Because those people were not speaking objectively, but were applying their own preconceptions, prejudices, preferences and motives. Or, more concisely, they had their own agendas. The consequence of getting things so badly wrong is that future predictions of doom are more likely to face a sceptical eye, which is what happens when you keep on crying 'wolf'.

This scepticism already greets the official guidelines of 14 or 21 units per week. Among my friends and acquaintances, there are people who drink regularly, and others who don't drink much at all, but I don't recall anyone ever suggesting to me that they take the guidelines seriously. If they are mentioned at all, they are usually treated as a joke. Now we find that the prophets of doom have been decisively proved wrong about 24 hour opening which means, as pundits, they are less likely to be taken seriously in future. The irritating thing is that I doubt they realise this.

I don't know anywhere that opens for 24 hours. There was one bar that did so in Southport, but it doesn't any more.
Posted by Neville Grundy at 5:50 pm