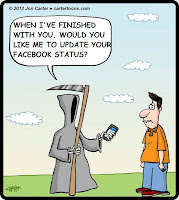 After the most recent celebrity deaths, I've been reading quite a few comments on Facebook and elsewhere to the effect of: "Let's get this awful year out of the way - roll on 2017." Don't hold your breath, because the Grim Reaper doesn't operate by the calendar. Having said that, it does seem to have been a particularly bad year. Some deaths are sad but not astonishing: for example, the actress Liz Smith who was 95 after all, but George Michael's death at 53 was completely unexpected. I was never a fan, although I've always acknowledged his talent, but as Billy Bragg has said, "His support for the LGBTQ community, the NHS and the miners marked George Michael out as an activist as well as a great artist."

Here is my own, highly subjective list of musical losses that were particularly significant to me. Not mentioning an artist here should not be taken as a posthumous snub.

June
November
December
There have been many other great acts we have lost this year, such as Merle Haggard, Prince, Maurice White (of Earth Wind and Fire) and, as previously mentioned, George Michael, but this list is specifically of music I have chosen to listen to over the years, whether recorded or live. I'm just hoping I don't have to update it between now and 2017.

Here are some high energy jigs and reels by Dave Swarbrick with Fairport Convention at Glastonbury in 1971. Plus ça change ...

Posted by Neville Grundy at 4:10 pm